Orioles rally in 6th, Chirinos has 3 RBIs in win over Angels 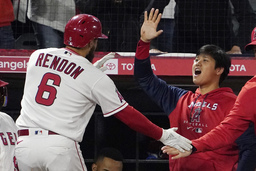 "Trust the slider, I guess," he said.

The Orioles' tricky lefty and his teammates have ample reason to trust the progress of Baltimore's rebuilding effort after putting up one of their best performances of the season against the Angels.

Robinson Chirinos drove in three runs and Zimmermann pitched five-hit ball into the seventh inning of the Orioles' 5-3 victory over Los Angeles on Friday night.

Zimmermann (1-0) had another solid start, facing the minimum 15 batters through five innings while extending his season-opening scoreless streak to 14 innings. His teammates erased all of Los Angeles' first three hits with double plays, and Zimmermann struck out Ohtani, Mike Trout and Anthony Rendon in an impressive fourth inning.

"That 1-2-3 is a serious punch, so it's definitely a challenge," Zimmermann said. "But that's what makes this game fun is playing against guys like that."

Zimmermann fanned Ohtani three times on 12 pitches, throwing just two fastballs in that mix. He got Ohtani with a changeup for the first strikeout, and then got him twice with sliders.

"We're just really happy with how far he's come," Baltimore manager Brandon Hyde said of Zimmermann. "His changeup is really good, and he had some good breaking balls tonight. That's a good lineup over there. We played really good defense behind him, and our bullpen held on."

Anthony Santander and Ramon Urias drove in runs in a small-ball rally in the sixth for the Orioles, who have won twice in the first five games of their 10-game trip. Baltimore took a 5-0 lead in the sixth, turned four double plays and got stellar relief pitching during an outing in which it didn't look like a rebuilding club.

"That was probably our best offensive night of the season by far," Hyde said. "We got five runs, but we hit numerous balls hard again. We did a lot of things really well tonight."

Rendon chased Zimmermann with a two-run homer in the seventh for the Angels, who struggled in their return to the Big A after an impressive 5-2 trip that put them in first place in the AL West.

"It got away from us there a little bit, but we kept battling back, and I loved the attitude of the team," Angels manager Joe Maddon said.

Trout went 1 for 3 with a walk and a leadoff single in the ninth in his return from a three-game injury absence, but he was stranded when Jorge Lopez struck out pinch-hitter Brandon Marsh, completing his third save.

Rookie Reid Detmers (0-1) gave up three hits over five innings in his longest start of the season for the Angels, but Chirinos delivered a two-run single in the second.

"I didn't have my best stuff, but I got through five," Detmers said. "Went out there and got some quick outs. I did my job."

Santander and Urias drove in runs on balls that didn't leave the infield during Baltimore's resourceful rally against Archie Bradley, who was charged with three runs after Chirinos added an RBI groundout off Jimmy Herget.

Max Stassi doubled and scored on Andrew Velazquez's flyout in the sixth for Los Angeles' first run, but Zimmermann ended the inning with his third strikeout of Ohtani, whose career offensive numbers are significantly lower against left-handed pitching.

Ohtani went 0 for 4, grounding into an inning-ending double play in the eighth.

Orioles: Chirinos missed only one game after getting hit in the face with a pitch in Oakland on Wednesday.

Noah Syndergaard (2-0, 1.59 ERA) takes the mound for the Angels for the second time this season, facing Baltimore's Spenser Watkins (0-0, 2.25 ERA). Syndergaard is the first pitcher to win each of his first two starts for the Angels since Ohtani did it as a rookie.