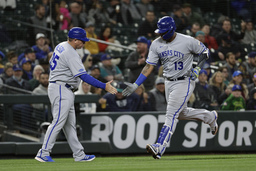 SEATTLE (AP) Julio Rodriguez barely had a chance to pop up from his slide and finish screaming in celebration at second base before getting sent home by a shot off the bat of Jarred Kelenic.

It was a two-pitch sequence of highlights Seattle fans have waited a couple of weeks to see from their young, promising outfielders - with the hope of more to come.

"We've been dealing with a lot of things to back to back for a lot of nights now and being able to deliver, both of us, felt really good," Rodriguez said.

The duo provided all the offense for Seattle on Friday night as Rodriguez lined a bases-loaded, two-run double and Kelenic followed with a two-run triple on the next pitch as the Mariners beat the Kansas City Royals 4-1.

Seattle starter Chris Flexen threw seven strong innings and the Mariners relied on one big inning to reach 5-2 on their nine-game homestand.

This night was about Seattle's young outfield stars coming through with big hits in a key moment.

"There's been some calls that haven't been going his way. But I'm trying to help him as best I can and just stay focused, don't expand the strike zone and he's doing a really good job of not doing that," Kelenic said of Rodriguez. "You saw, he got a good pitch to hit, up in the zone and put a good swing on it."

First up was Rodriguez, mired in an early slump of frustrating strikeouts. Rodriguez began the night tied for the league lead with 22 punchouts, but his swing decisions have been praised by Mariners coaches for laying off pitches that appear outside the zone yet have been called strikes.

Rodriguez came through in the fourth. He fouled off a tough 3-2 pitch from starter Brad Keller, then got on top of a 93 mph fastball and lined it to right-center field.

The 21-year-old slid headfirst into second base and screamed into the noise of a home crowd that has anxiously awaited big moments from the touted prospect.

Kelenic, also with his share of bad luck at the plate early on, followed on the next pitch from Keller with a deep shot to right center that Michael A. Taylor couldn't track down.

The fourth was the only inning Seattle was able to do damage against Keller, but he failed to make it through the fifth due to a growing pitch count. Keller (0-2) allowed six hits and three earned runs. He had given up five hits and two earned runs in his first two starts combined.

"You look at the bats, the broken bats, the swings that they had off, I thought that was some of his best stuff," Royals manager Mike Matheny said.

Salvador Perez homered in the sixth, his fifth straight game with a homer in Seattle. That was the only run Flexen (1-2) allowed as he pitched seven innings for the first time this season, scattering six hits and striking out five.

Anthony Misiewicz pitched the eighth and Andres Munoz threw the ninth for his first save.

Kansas City's streak of 11 games to begin the season without an error ended when Keller was unable to cleanly field Abraham Toro's grounder during Seattle's big fourth inning. Bobby Witt Jr. also had a throwing error in the eighth. The Royals began the night as one of two teams in baseball that hadn't committed an error along with San Diego. The 11 games to begin the season without a defensive miscue was a new American League record.

Mariners: Seattle had no new addition to its list of positive COVID-19 cases for the second straight day. The Mariners have yet to have any of their players or coaching staff rejoin the team.

Royals: LHP Kris Bubic (0-1, 10.80) will make his third start Saturday. Bubic allowed only one run and two hits in his last start but gave up six walks.