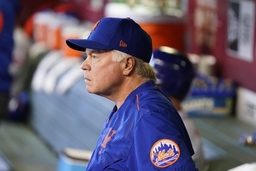 PHOENIX (AP) Tylor Megill's fastball was blazing, J.D. Davis smashed his first homer of the year and the opportunistic New York Mets won another ballgame by beating the sloppy Arizona Diamondbacks 6-2 on Sunday.

The good times keep rolling for these Mets, who took two of three against the D-backs for their fifth straight series win to start the season, matching a franchise record set in 2018.

The NL East leaders leave the desert with a 12-5 record.

"We're going to savor it," Davis said. "But we know how this game goes - it can humble you really quick. We're happy, but it's April. We've got to stay on the gas pedal."

It was another good showing for New York's starting pitching, which came into the game with an 8-2 record and a 2.44 ERA. Megill (3-0) gave up two runs and four hits over 6 2/3 innings, walking one. He struck out seven, at times overpowering the Diamondbacks with a fastball that sat in the 96-97 mph range all afternoon.

"I felt like everything was working," Megill said. "Throwing a lot of strikes today."

The Diamondbacks didn't do much at the plate, with one notable exception. Arizona tied it at 1 in the fourth on Christian Walker's 467-foot drive to left-center that landed on the concourse behind the seats.

It was the second-longest homer of his career, behind a 479-footer Walker hit off Clayton Kershaw in 2018.

Arizona got another good start from veteran left-hander Madison Bumgarner, who gave up one unearned run and four hits with four strikeouts over five innings. The four-time All-Star has a 1.00 ERA through his first four outings.

"Everybody here wants to win, everybody wants to make the plays," Bumgarner said. "This is a frustrating game sometimes. It doesn't always go your way."

The Mets took control against the D-backs' bullpen, scoring one run in the sixth and two more in the seventh for a 4-1 lead. New York took advantage of three Arizona errors that led to two unearned runs.

Davis' solo homer was his first of the season. J.B. Wendelken (0-1) took the loss after giving up one run in one inning of relief.

James McCann and Starling Marte were both hit by pitches, bringing the Mets' season total to an MLB-high 14.

At least the HBPs were useful. Both players were plunked during the seventh inning as the Mets scored twice.

Even the team's pitchers weren't immune from the pain. Reliever Seth Lugo took a lined shot from Daulton Varsho off his foot in the eighth. The ball bounced back to McCann, and the catcher was able to throw out Varsho at first. Lugo wasn't hurt and stayed in the game.

It was another poor defensive game for the D-backs. Arizona came into the game with 15 errors, which was the second-most in the league.

Third baseman Sergio Alcantara made two errors and catcher Jose Herrera's errant throw to third on a stolen base was No. 3 and allowed Marte to score. Arizona's bullpen wasn't great, either, hitting two batters with pitches and walking two more in the seventh.

"The pitching and defense didn't do its job executing and the next thing, you look up and you've given up six runs," Diamondbacks manager Torey Lovullo said. "There's a very fine line between execution that leads you to wins or leads you to losses."

Mets: Manager Buck Showalter clarified to reporters that RHP Jacob deGrom (shoulder) actually had a CT scan Friday instead of an MRI. A follow-up MRI is scheduled for Monday.

The Diamondbacks host a three-game series with the Dodgers starting Monday. RHP Merrill Kelly (1-0, 0.59) takes the mound for Arizona. RHP Walker Buehler (1-1, 4.02) is scheduled to pitch for the Dodgers.