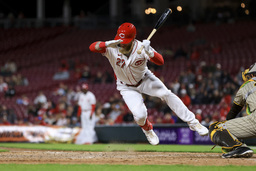 Gore (2-0) allowed a run on five hits as the Padres won for the seventh time in nine games.

"He was fantastic," Padres manager Bob Melvin said. "He ran his pitch count up a little bit (102) just because he had so many strikeouts. But you know, for a rookie to be pitching as well as he has and consistently as he has from his first game has been really fun to watch because he's really a high-end guy we have big plans for."

Eric Hosmer drove in two runs for the Padres, including a leadoff homer in the eighth.

San Diego will go for its second sweep of the season Thursday of the hard-luck Reds, who have lost 12 of 13 amid a rash of injuries and slumps. Cincinnati's 3-15 record in the worst in the majors.

Gutierrez walked the bases full with one out in the second, but he allowed just one run on Luis Campusano's sacrifice fly, striking out C.J. Abrams to end the threat.

There was more trouble in the third when Trent Grisham led off the with a triple and scored on a bloop single by Jake Cronenworth. After another blooper by Manny Machado, Profar homered into the first row of seats in right field to put San Diego up 5-0.

The Reds loaded the bases in the first with one out but Gore worked out of the jam with no damage. In the Cincinnati third, Tommy Pham singled and tried to score from first on Kyle Farmer's two-out double to left. He was called out at the plate, but Cincinnati challenged the call. The replay showed Pham got his left hand to the plate just before the tag.

Pham also had a solo homer in the seventh. Farmer had four doubles and two RBIs.

Brandon Drury hit a one-out solo homer in the ninth, and Farmer's fourth two-bagger drove in another run with two outs. Closer Taylor Rogers, the Padres' sixth pitcher of the night, got Jake Fraley to fly out to right with two runners on for the save.

"You don't want to bring your closer in a game like that, but we had to," Melvin said.

The 23-year-old Gore is one of the top pitching prospects in baseball and so far has been terrific. He's given up three runs and 12 hits in 15 innings through his first three starts. His ERA is 1.76.

"I need to be able to get through five innings," Gore said. "There's definitely things we can clean up and get deeper into games."

"The last few games we've been playing good baseball," Pham said. "It has been one big inning (for opponents). Things aren't going our way, and there has been some luck by the other teams. That's part of it."

Padres: OF Wil Myers was out after aggravating a bruise between his right thumb and index finger in Tuesday night's game.

Reds: Manager David Bell said 3B Mike Moustakas (right biceps strain) likely will be activated from the injury list Thursday and could be used as a pinch hitter. ... LHP Justin Wilson (elbow soreness) was placed on the 10-day injured list Wednesday, the 15th player to appear on the list this season.