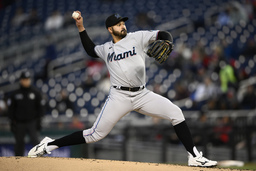 WASHINGTON (AP) If this is how Pablo Lopez pitches when he's not feeling particularly well - dizzy, sort of light-headed, "eyes lagging, in video game terms," to use his description - imagine what the Miami Marlins righty will do on days when everything is perfect.

So he hydrated, ate a banana - and was effective as can be Wednesday night, lowering his majors-best ERA to 0.39 by throwing six shutout innings to help Miami move above .500 for the first time in 2022 by edging the slumping Washington Nationals 2-1.

"Ahead in counts, mixing pitches. Really nice job. Just keeps doing his thing - and really on a night I don't think he felt that great," Marlins manager Don Mattingly said.

Mixing a four-seam fastball, cutter and changeup before an announced crowd of 13,356, Lopez (3-0) baffled a Nationals offense that has scored a grand total of 14 runs during a losing streak that grew to seven games.

Lopez, who came in with a 0.52 ERA, gave up just three hits and struck out six.

Jesus Aguilar homered off Erick Fedde (1-2) in the third, and Miami led 2-0 in the fifth when Jacob Stallings' single was followed by three consecutive walks - the last two by reliever Andres Machado - to push across another run.

Nationals manager Dave Martinez tinkered with his lineup, swapping Josh Bell and Nelson Cruz - moving Bell up one spot to No. 3, behind Juan Soto, with Cruz sliding one place to cleanup. That trio went 0 for 9 with three walks; on defense, right fielder Soto and first baseman Bell each was charged with an error.

Martinez also inserted rookie shortstop Lucius Fox - who left Sunday's game after throwing up in the first inning - in place of the .123-batting Alcides Escobar.

With two outs in the eighth, Cesar Hernandez reached on an error by first baseman Aguilar, bringing up lefty batter Soto. Miami countered with left-hander Tanner Scott, who got Soto to pop up, but second baseman Jazz Chisholm Jr. failed to make the catch and was charged with an error. Bell walked to load the bases, and Scott also walked Cruz, forcing in an unearned run to make it 2-1.

With the bases still full, Anthony Bender got out of the inning when Yadiel Hernandez flew out to the warning track.

"It's a homer, dude. That's been a homer for 100 years," Cruz said. "Something's off right there. I don't know what it is. We can only speculate, but it was weird."

"Yadiel crushed that ball into left-center. We caught a break there, just because of the wind a little bit, the cold air," he said. "The ball's not traveling like it does in the summer."

Bender stayed in for the ninth and worked around Maikel Franco's single off the wall in left to earn his fourth save in five chances. He got Fox to fly out to end it.

Nothing really seems to be working right now for Washington, which is 6-14 and coming off two last-place finishes in the NL East since winning the 2019 World Series. Only the Cincinnati Reds have fewer wins.

"We have to get it done. That's the bottom line. We have to get the job done, you know?" said Cruz, who is hitting .167. "Everybody - including myself."

The Marlins, meanwhile, have won four consecutive games to get to 9-8 following a 1-4 start.

Take the pandemic-shortened 60-game season in 2020 out of the equation, and the Marlins haven't finished a full year with a winning record since going 87-75 in 2009.

"We want to be .500 all season. We know the start was a little shaky, but from there, we all knew that we want to have a winning record all year," Chisholm said. "We don't want to be bouncing back and forth from losing to winning record."

Two struggling left-handers pitch in Thursday's series finale: Washington's Patrick Corbin vs. Miami's Trevor Rogers. Corbin is 0-3 with an 11.30 ERA; Rogers is 0-3 with a 6.94 ERA.