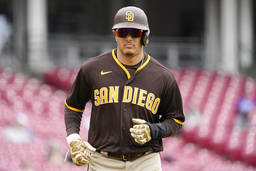 CINCINNATI (AP) Ha-Seong Kim hit a tiebreaking, three-run double in the sixth inning and the San Diego Padres beat the Cincinnati Reds 7-5 Thursday to complete a season sweep in the series.

Kim had three hits, including two doubles, the second glancing off the top of the left field wall.

"I wanted it to be out so bad," Kim said via interpreter, adding with a slight smile, "I'll eat more and do more weight training."

"From the bench I thought Santillan was trying to throw his slider too hard," Reds manager David Bell said. "He's been so good for us, and we've asked a lot of him. He was just pulling off the slider."

Manny Machado had four hits, giving him seven in the last two games as San Diego improved to 6-0 against the Reds this season.

Eric Hosmer, who went into the game leading the majors in hitting, gave San Diego a 1-0 lead with a first-inning single to center field. Hosmer went 2 for 4 to boost his average to .415. He finished with six RBIs in the three-game series.

"The whole year, our 3-4-5 guys have been doing a lot of damage," Padres manager Bob Melvin said. "They've been carrying the load. Guys have to pick it up across the board."

The Reds, a major league-worst 3-16, scored three runs - two earned - against three Padres relievers before Taylor Rogers pitched the ninth for his seventh save. The start is Cincinnati's worst since going 3-18 to open 2018.

"We have to take advantage of teams when they're playing poorly," Melvin said. "We caught them at a good time."

"It is tough to find answers," Bell said. "There have been a lot of losses. We just have to keep playing. Mixed into all these losses there is a lot of hope. There were really good at-bats, grinding out. There's been good pitching. We just haven't been able to put it all together to win games. That's the bottom line."

Reds starter Tyler Mahle (1-3) suffered his third loss in his last three starts. The Padres reached him for six hits and three runs with two walks and five strikeouts in 5 1/3 innings.

Mike Moustakas had two hits and drove in Cincinnati's first run after being activated from the 10-day injured list before the game. Moustakas missed eight games with right biceps soreness.

Pham helped Mahle escape jams by ending the first and second innings with sliding catches of fly balls to short left field near the line.

Mark Kolozsvary, the starting catcher for the United States team that won the silver medal at the 2020 Tokyo Summer Olympics, collected his first major league hit and RBI with a sixth-inning single that gave the Reds a brief 2-1 lead.

Padres: OF Wil Myers (right thumb contusion) was placed on the 10-day injured list, retroactive to Wednesday. ... RHP Austin Adams (right forearm tendinitis) was transferred to the 60-day IL. ... Matt Beaty was hit just above the left knee with Santillan's first pitch in the sixth inning. Beaty stayed in the game.