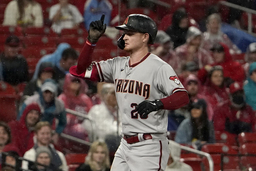 St. Louis star Nolan Arenado had two hits after deciding to appeal a two-game suspension from Major League Baseball for his role in a brawl with the Mets on Wednesday.

Tommy Edman and Tyler O'Neill drove in two runs each for the Cardinals, who won their second game in a row after a three-game losing streak.

Pavin Smith hit a two-run homer for Arizona, which had a two-game winning streak snapped.

Hudson (2-1) gave up one hit in his 84-pitch stint. He struck out four and walked three. He did not allow a hit until Daulton Varsho singled with one out in the sixth.

"After the second inning, I started making tighter pitches, a little more consistent," Hudson said. "It felt good trying to work that slider off the sinker."

Hudson underwent Tommy John surgery in late September of 2020 and missed the majority of last season while recuperating.

"There was really good action on that sinker," Cardinals manager Oliver Marmol said. "On top of that, the cutter was impressive. When he's in the zone, it's hard to make solid contact.":

O'Neill had run-scoring sacrifice flies in the first two innings to help the Cardinals to a 5-0 lead against Arizona starter Humberto Castellanos.

Goldschmidt, who had three hits, added a two-run single in the sixth.

Edman and Goldschmidt had RBI hits to close out a three-run outburst in the second. Castellanos (1-2) gave up five runs on five hits over two innings.

The Cardinals, whose 15 hits were all singles, improved to 99-61 against Arizona, which came into the league in 1998.

St. Louis, a team known for its power, has failed to homer in the last eight games.

"There's a lot of ways to win," Goldschmidt said, "And we've got to be good at every facet of the game."

The Diamondbacks managed just one baserunner through the first five innings.

"It was a clunker," Arizona manager Torey Lovullo said. "We didn't come out and do the things I wanted us to do. We got sucker punched. It took us four or five innings to get into the flow of the game,"

Arenado was suspended shortly before first pitch and decided to appeal. The third baseman ducked a high pitch from Mets reliever Yoan Lopez in the eighth inning, sparking a benches-clearing fracas. He's eligible to play until his appeal is processed.

"I respect the decision that the league took," Marmol said. "Obviously, it's being appealed for a reason."

St. Louis reliever Genesis Cabrera was also suspended one game for his part in the melee. He chose to serve the suspension Thursday night.

ADVENTURE ON THE BASE PATHS

St. Louis catcher Yadier Molina, not known for his speed, beat out an infield hit up the middle in the sixth inning. He promptly recorded his first stolen base of the season.

Molina has not been thrown out in his last 10 stolen base attempts.

"He knows when to do it and today was the right time for it," Marmol said.

Harrison Bader also stole a bag, and the Cardinals have 17 successive thefts. They have a league-leading 19 stolen bases in 20 attempts this season.

The Cardinals welcomed their 50 millionth fan to Busch Stadium III. They have played 1,221 home games since the stadium opened on April 10, 2006. They are the fastest to reach that mark, eclipsing the record of 1,259 games set by the San Francisco Giants in Oracle Park to 2000-2015.

Cardinals: OF Dylan Carlson was relegated to designated hitter duty after injuring his toe on Wednesday.

RHP Adam Wainwright (2-2, 3.86) will face Arizona LHP Madison Bumgarner (0-1, 1.00) in the second game of the four game set on Friday. Wainwright is 11-5 with a 3.28 ERA in 18 appearances against Arizona. He has earned wins in five of his last six starts against the Diamondbacks. Bumgarner has not allowed a run over his last two outings.