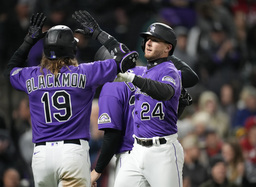 DENVER (AP) Ryan McMahon hit a tiebreaking, three-run home run in the fifth inning and the Colorado Rockies sent the Cincinnati Reds to their major league-worst 17th loss in 20 games with a 10-4 victory on Friday night.

Elias Diaz also went deep and Antonio Senzatela (2-1) pitched 6 1/3 strong innings for the Rockies, who had 14 hits and snapped a four-game skid hours after star Kris Bryant was placed on the 10-day injured list with a sore back.

"My fastball command was there all night," Senzatela said. "I kept the ball on the ground and had good results."

The Reds are off to their worst start since beginning 3-18 in 2018, and dropped their fourth straight.

Hunter Greene had an uneven start after regularly surpassing 100 mph in his first two outings. On Friday, his fastball was clocked in the 96-97 mph range for the second straight start, and McMahon pulled a 96-mph fastball into the second deck in right.

"Hunter actually pitched pretty well. (Velocity) down a little bit again, but you know what, that's all right," Reds manager David Bell said. "That home run to McMahon, a fastball that ran back over the plate. Other than that, he was pretty good."

McMahon's second homer of the season came after he committed four of Colorado's seven errors in an ugly four-game sweep at Philadelphia.

"Yeah, it definitely helped me turn the page," the third baseman said.

Greene (1-3) was charged with four runs and six hits with four walks and six strikeouts in 4 1/3 innings. He threw a career-high 95 pitches.

After Diaz's wind-aided homer to right in the second on a blustery night at Coors Field, the Reds tied it in the fourth. Tommy Pham, who had four hits and drove in two, led off with a double and scored on Kyle Farmer's sacrifice fly.

Jonathan India had three hits but grounded into Cincinnati's fourth double play with the bases loaded against Jhoulys Chacin to end the seventh.

It was a difficult night for fielders with the strong left-to-right wind. A gust lifted the Reds' on-deck circle into the air in the first inning, while wrappers and napkins swirled about for much of the game. Pham misjudged Alan Trejo's deep fly to left-center that turned into an RBI double in Colorado's four-run seventh against ex-Rockies lefty Phillip Diehl.

Senzatela gave up a run and seven hits with two walks and one strikeout after being roughed up in a 13-0 loss at Detroit last week.

The Rockies played their fourth straight game without Bryant, who will be eligible to return May 6 at Arizona. An MRI on Friday revealed no structural damage.

"It wasn't feeling better to the point where we felt he could play in the next few games," manager Bud Black said.

Reds slugger Joey Votto tweeted a video Friday morning of Lucy holding a football for Charlie Brown before inevitably pulling it away.

Lucy then grabs a piece of paper Charlie dropped and reads it.

"How hitting feels sometimes. That's Lucy reading your stats to you," Votto wrote.

Votto was 1 for 4 with a strikeout to up his meager average to .136

"He feels like he's just on the brink every single day of breaking out," Bell said. "Maybe the results haven't been there, but he's really trusting his plan."

Rockies: INF Brendan Rodgers (back) missed his second straight game after doing some swinging in the cage pregame. "He's getting closer," Black said. ... Garrett Hampson (wrist) said he'll begin a two-game rehab stint with Triple-A Albuquerque on Saturday and hopes to return to the Rockies on Tuesday.

Rockies: Tampa Bay claimed reliever Ben Bowden off waivers, leaving Colorado short on lefties in the bullpen. The Rockies have an open spot on the 40-man roster.

The Reds are expected to make a roster move so that the 28-year-old Overton can make his Reds debut and seventh career start on Saturday night against Rockies RHP Chad Kuhl (2-0, 1.10 ERA).