Smith, McNeil 4 hits each as Mets beat Phils behind Scherzer 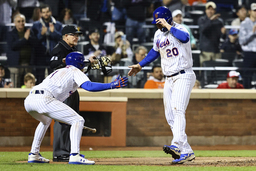 Sometimes it just takes a little help from his friends.

Dominic Smith went 4 for 4 with three RBIs to back an inconsistent Scherzer, and the New York Mets won their seventh straight series to begin the year by beating the Philadelphia Phillies 10-6 on Sunday night.

"It's pretty fantastic. It's been a lot of fun so far," Jeff McNeil said. "This team's playing great baseball. We're kind of doing everything right."

McNeil also had four of New York's 15 hits, and Starling Marte drove in three runs. The Mets took two of three in a weekend set that began with the NL East leaders pitching the second no-hitter in franchise history Friday night - a combined gem by Tylor Megill and four relievers.

Before this run, New York (16-7) had never won more than five consecutive series to start a season. According to the Elias Sports Bureau, the previous major league club to take their first seven series was the 2018 Arizona Diamondbacks, who won their first nine.

Scherzer (4-0) struck out his first five batters for the first time in his career and looked overpowering at times. But he gave up two home runs to Mets nemesis Kyle Schwarber, and a solo shot to Bryce Harper on an 0-2 pitch.

"I thought we did a good job today with our at-bats off him," Schwarber said. "I thought he had his good stuff out there."

The three-time Cy Young Award winner remained unbeaten since joining the Mets on a $130 million, three-year contract. He is 15-0 - the longest winning streak of his career - in his last 24 regular-season starts since losing 3-0 to Milwaukee on May 30, 2021, with the Washington Nationals, who traded him to the Los Angeles Dodgers in late July.

"That's what it's about. Coming here and having your ballclub win," Scherzer said. "It's not about me. It's not about my stuff. It's about going out there and doing everything you can for the team to come out with a win. That's why tonight's a great night. Everybody had a hand in it."

The right-hander struck out nine and walked one in six innings. He gave up four runs and five hits.

Scherzer's teams have won each of his past 18 regular-season starts. He did drop a 1-0 decision to San Francisco in last year's playoffs with the Dodgers.

"As awesome as it is, I could very easily have lost tonight," Scherzer said. "But I didn't. My teammates picked me up."

With the score tied at 3 in the fifth, New York loaded the bases against starter Zach Eflin (1-2). The go-ahead run scored on J.T. Realmuto's passed ball, and Smith's two-run single up the middle made it 6-3.

Marte made a diving catch in right field to thwart a potential Phillies rally in the seventh, and an error by second baseman Jean Segura helped the Mets tack on three in the bottom half - including Marte's two-run single.

McNeil added an RBI double in the eighth, matching his career high with his ninth four-hit game. The last four have come against Philadelphia.

Smith entered the night 6 for 36 (.167) with four RBIs this season. He also equaled his career high for hits. Five of his 13 three-hit games have come against the Phillies.

"I feel like when you come off the bench, you kind of have to be realistic and just be OK with baby steps," Smith said. "So I think I've been having pretty decent at-bats and tonight it was just good to have some success finally."

Johan Camargo hit a two-run homer for Philadelphia off Yoan Lopez with two outs in the ninth.

Lopez threw inside to Schwarber, prompting the umpires to warn both benches, after Francisco Lindor was hit by a 93 mph in the eighth. Lopez then plunked Alec Bohm with a 1-2 changeup, but was not ejected.

Teams must trim their active rosters from 28 players to 26 on Monday, leaving many to wonder if the Mets will cut slumping DH/2B Robinson Cano. The 39-year-old Cano, who sat out last season while serving his second suspension for performance-enhancing drugs, is batting .195 with one homer, three RBIs and a paltry .501 OPS in 12 games. He is making $24 million this year and is due another $24 million next season in the final year of his contract.

"I think it's definitely going to be a very emotional day, no matter who it is," Smith said.

The Mets are 4-2 against the Phillies, and the division rivals square off again Thursday in Philadelphia for the opener of a four-game set. They play 13 times before the end of May.

Phillies: With the team off Monday, shortstop Didi Gregorius was rested to give him a two-day break. Girardi hopes that might fully heal the bruised left hand that sidelined Gregorius for five games late last month.

Mets: RHP Sean Reid-Foley was placed on the 10-day injured list with a partially torn ulnar collateral ligament in his pitching elbow that will sideline him indefinitely. It's possible he could need Tommy John surgery. Lopez was recalled from Triple-A Syracuse to fill the bullpen spot.

Mets: In the first matchup between the NL East rivals this season, New York hosts the World Series champion Atlanta Braves on Monday night. Chris Bassitt (3-1, 2.25 ERA) pitches for the Mets against Max Fried (2-2, 3.00) in the opener of a four-game series that includes a doubleheader Tuesday.