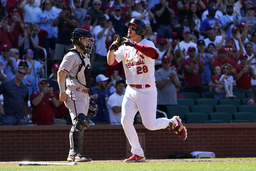 ST. LOUIS (AP) St. Louis catcher Andrew Knizner had to take a peak at the scoreboard.

He couldn't believe his eyes after a catching a 103.1 mile-per hour fastball from reliever Ryan Helsley in the eighth inning of the Cardinals' 7-5 win over the Arizona Diamondbacks on Sunday.

"Any time you can run up 103, that lights up the entire crowd," Knizner said.

St. Louis won for the third time in five games and salvaged a split of the four-game series.

Helsley retired all six batters he faced to pick up his first save of the season. He overpowered Ahmed, Cooper Hummel and Daulton Varsho in striking out the side in the final frame. Helsley has 16 strikeouts without a walk in seven appearances this season covering 8 1/3 innings.

Knizner couldn't help but take a quick look at the radar gun reading after Helsley struck out Ketel Marte for the second out in the eighth.

"I didn't have that much time, that thing came in quick," Knizner said. "I knew it had a little zip to it. I kind of wanted it down and away, but (he) ripped it up and in. Anything at 103 kind of works."

"It's a big jump," Helsley said. "I hadn't thrown in a couple days. I was feeling pretty good."

Brendan Donovan had a run-scoring grounder, and Bader slammed a two-run shot off reliever Keynan Middleton ((0-1) to put the Cardinals up 6-5.

"You just try and stay cool in that situation," Bader said. "This was a big win, one that we needed."

One batter later, Arenado slammed his team-high sixth of the season. He had served a one-game suspension on Saturday for his part in an altercation against the New York Mets on Wednesday.6

Kodi Whitley (2-0) got the last out in the top of the seventh to pick up the win.

Luplow, who entered the game on a 1-for-11 skid, had solo homers in the first and seventh innings for his fifth career multi-homer game.

Ahmed hit his third homer of the season to snap a 2-2 tie in the fifth inning. He has three homers in his last four games.

"We had a game where we felt like we should have won," Ahmed said. "We've run into some good arms and we're not performing against those guys."

Arizona starter Zach Davies allowed just three hits in a five-inning, 90-pitch stint. He struck out two and walked one. Both of the runs he gave up were unearned.

Albert Pujols, who went 1-for-4, started at first base for the Cardinals for the first time at home since Game 7 of 2011 World Series.

The Cardinals' string of 20 successive stolen bases ended when Tyler O'Neill was throw out by catcher Daulton Varsho in the third inning. It was the longest streak since they swiped 33 in row from Sept. 20-29, 1985.

The start time of Monday's makeup game against Kansas City has been move to 12:15 p.m. central time to avoid potential rain. It was originally set for 3:15 p.m.

Cardinals: St. Louis INF Tommy Edman left in the seventh inning with an aggravated hip flexor. He expects to miss one game at the most. "Just began to tighten up a couple days ago," Edman said. "It got tighter today." ... INF Paul Goldschmidt was given his first day off of the season. Pujols started in his place at first base.

Diamondbacks: RHP Zac Gallen (0-0, 0.60) will face Miami RHP Pablo Lopez (2-0, 0.39) in the first of three-game set on Monday in Miami. Gallen has allowed just one run over his three starts this season.

Cardinals: LHP Steven Matz (2-1, 6.11) will take on Kansas City RHP Zack Greinke (0-1, 2.86) in a makeup game on Monday. The original contest was rained out on April 13. Matz allowed four runs in four innings on Wednesday.