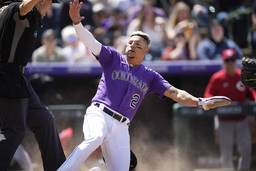 DENVER (AP) Kyle Freeland tossed seven strong innings for his first win of the season, and the Colorado Rockies completed a series sweep of the struggling Cincinnati Reds 10-1 on Sunday.

Brendan Rodgers broke out of a season-long slump with two hits and four RBIs and C.J. Cron and Randal Grichuk homered for the Rockies.

Rodgers missed the previous four games with a balky back but said he felt good at the plate and at second base.

"Felt good throughout the whole game and felt good in (batting practice)," he said. "I'm just going stay on my exercises and what I'm doing in there and hopefully it's all good."

Freeland (1-3), who signed a five-year, $64-million extension on April 19, allowed a run and four hits against a Cincinnati team that is off to its worst start in franchise history. The Reds (3-19) have lost six straight and 17 of their last 18.

Brandon Drury homered and doubled for the Reds, who surpassed the 2018 team that started 4-18.

"Our focus is by turning this around; that's it. Getting this going in the right direction," Cincinnati manager David Bell said. "I believe so much in what we're doing as a team as an organization like we've made so much progress.

"This is a tough, tough spot and I really have a lot of faith in our staff and our team to turn this around. That's a huge challenge. But I know it's going happen. That's the only focus I have. I haven't thought of anything else."

Reds starter Reiver Sanmartin got only two outs before leaving after throwing 43 pitches. Sanmartin (0-4) gave up a two-run single to Grichuk and a two-run homer to Cron, his eighth. Rodgers had an RBI single and Sanmartin was done after loading the bases with two outs.

Sanmartin's ERA ballooned to 13.78 after allowing six runs on six hits, walking two and committing a balk. He was optioned to Triple-A Louisville after the game.

"Purely the confidence," Sanmartin said through an interpreter. "After that first batter that got on base, it kind of just dropped from there. I was afraid of the batters just getting hits. I couldn't separate the things that I could control and the things that have happened during the game."

Reliever Buck Farmer came on and hit Jose Iglesias to complete the six-run first inning. Rodgers, who entered Sunday hitting .078, had a three-run double in the second to make it 9-0.

Rodgers said he was happy to put April in the past.

"New month. A reset for me," he said. "Definitely felt good get some get some hits, get some RBIs."

Drury hit his fourth homer of the season leading off the fifth and Grichuk led off the eighth with his third homer.

Elehuris Montero made his major league debut Sunday and took advantage of his opportunity. He got his first hit when he singled in Colorado's six-run first inning. He clapped his hands as he ran to first.

He also singled in the seventh inning.

Montero, who served as the designated hitter, was one of the assets the Rockies received in the Nolan Arenado trade last year. He and infielder Alan Trejo were optioned to Triple-A Albuquerque after the game.

Reds: INF Jonathan India was placed on the 10-day injured list with a right hamstring strain. It is the second time this season he has been placed on the IL for the same issue. He missed nine games from April 15-25. ... OF Jake Fraley was also placed on the 10-day IL with right knee inflammation. Cincinnati recalled OF TJ Friedl and INF Alejo Lopez to take India's and Fraley's spots on the roster. Lopez was optioned to Triple-A after the game.

Rockies: OF Kris Bryant (back soreness) is eligible to come off the 10-day injured list Friday but said Sunday morning that he may need more time to get healthier and isn't rushing his return. ... OF/INF Garrett Hampson (right hand contusion) went 3 for 5 on Saturday in a rehab stint with Triple-A and is on track to return Tuesday.

Reds: RHP Vladimir Gutierrez (0-4, 4.71) will try to bounce back from a six-walk start at San Diego when he starts at Milwaukee of Tuesday night.