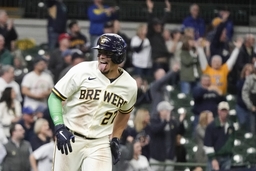 "I think he's as locked in as any hitter in the league right now," Brewers manager Craig Counsell said.

Cincinnati closed out a winless six-game trip with its ninth consecutive loss. The major league-worst Reds have dropped 20 of 21 overall.

Tyler Stephenson homered and drove in two runs, but Cincinnati was unable to overcome another shaky performance by hard-throwing rookie Hunter Greene (1-4).

Urias and Yelich connected against Greene in the first, and Rowdy Tellez's RBI double tied it at 3. Adames capped Milwaukee's three-run second with a two-run drive to left-center.

Taylor and Hiura went deep in the third before Greene was replaced by Luis Cessa.

The 22-year-old Greene was tagged for eight runs and nine hits in 2 2/3 innings in his fourth consecutive loss. He struck out seven and walked one. Greene's velocity jumped back up to 98 mph and he topped 100 once after his prodigious heat disappeared for two starts.

"Hunter maybe didn't have his best secondary stuff today," Reds manager David Bell said. "He had a good fastball and to his credit, he didn't back down. He kept coming back after them."

RETURN OF THE WALLBANGERS

Milwaukee hit just 14 home runs through its first 19 games this season but hit 20 during its six-game homestand against the Cubs and Reds and has 21 over it's last seven games, trying a franchise record for home runs during a seven-game stretch set in 2002.

"Not bad for a team that can't hit," said Yelich, who has three during the recent stretch. "Guys are putting good swings on balls, putting in a lot of work and working hard."

The Brewers' 34 runs are the most they've ever scored in a three-game series against the Reds, surpassing the previous high of 29 set April 24-26, 2017.

Things haven't much better in Cincinnati, either. The Reds are just 1-7 this season at Great American Ballpark, where they've also lost three straight.

After placing two players on the injured list Wednesday with unspecified designations, Bell is confident the team can avoid a full-blown COVID-19 outbreak. But he recognizes that it's not always easy despite comprehensive mitigation efforts.

"Obviously, it's something that's really important to us to keep everyone healthy as best as we can," Bell said. "But the reality is we're all together a lot, we have contact with lots of different people, just like everyone else but we're doing the best that we can."

Reds: RHP Connor Overton (0-0, 1.69 ERA) makes his second start of the season Friday in the opener of a three-game series against Pittsburgh. RHP JT Brubaker (0-2, 6.20) starts for the visiting Pirates.

Brewers: LHP Eric Lauer (2-0, 1.93 ERA) starts Friday night at Atlanta in the opener of a nine-game trip. The Braves, who beat the Brewers in their NL Division Series last year, have yet to announce a starter for the series opener.