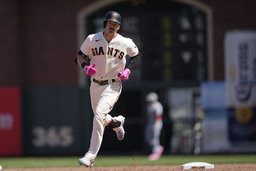 SAN FRANCISCO (AP) Mike Yastrzemski hit a tiebreaking home run into McCovey Cove in the sixth inning, and the San Francisco Giants only struck out once while beating the St. Louis Cardinals 4-3 Sunday.

San Francisco closer Camilo Doval got slugger Nolan Arenado to strike out swinging with the tying run on second base to complete his fifth save.

LaMonte Wade Jr. also homered in his third game off the injured list to help the Giants win their second straight after a five-game losing streak. They split the four-game series with the Cardinals.

San Francisco hitters didn't have any strikeouts until Joc Pederson whiffed against Giovanny Gallegos for the last out in the eighth inning. No team has gone an entire game without striking out since Kansas City on Sept. 7, 2017 against Minnesota, per MLB.com. The Giants last did it in 2008.

"The at-bat quality was excellent up and down the lineup," Giants manager Gabe Kapler said. "Obviously Yaz and LaMonte Wade had the big hits, but there's plenty of grindy at-bats around them supporting them. It sort of seems like the last couple of days we've been more like ourselves from a brand perspective. That feels good."

Yastrzemski, who missed seven games on the COVID-19 IL before returning Wednesday, had a sacrifice fly in the second, then homered on a 2-0 pitch from Genesis Cabrera (1-1) that easily cleared the wall in right field with two outs.

San Francisco owns a .749 OPS in two-out situations, fourth-best in the majors.

"We are really committed to not giving any at-bats away," Yastrzemski said.

Juan Yepez hit his first career home run for St. Louis and has hit safely in all five games he's played in since being called up from the minors Tuesday. The rookie outfielder also walked and scored on Harrison Bader's groundout.

Dominic Leone (2-0) won despite allowing the tying run in the sixth.

Yepez homered after Albert Pujols was hit near his left wrist by a 90 mph sinker from Jakob Junis. The Cardinals slugger winced and rubbed his wrist as he slowly walked to first. Yepez crushed the next pitch to center.

Wade's two-run homer off Dakota Hudson in the bottom of the inning came after Darin Ruf's leadoff walk. Luis Gonzalez then reached on a fielder's choice and scored on Yastrzemski's sacrifice fly.

Hudson scuffled through a second straight rocky performance, allowing three runs and five hits in 4 2/3 innings. He matched his season high of four walks and failed to make it through five innings for the third time in six starts.

Junis had five strikeouts in five innings and allowed three hits and two runs after being called up from Triple-A Sacramento before the game.

Pujols and Yadier Molina received a standing ovation from the Oracle Park crowd before the fourth inning after it was announced that Sunday was the final game in San Francisco for the two St. Louis stars. Pujols stood near the plate and Molina emerged from the dugout, tipped his cap and clapped in response to the ovation. Both players, along with pitcher Adam Wainwright, are expected to retire after the season.

"From the first day that I played against both of those guys, it was special because they're guys that are going to be enshrined in the Hall of Fame forever," Yastrzemski said. "It was a classy move."

Cardinals: Jack Flaherty threw about 30 pitches in his bullpen session Saturday, an important step as the right-hander works his way back from a shoulder injury after being shut down in the spring.

Cardinals: After a day off Monday, the Cardinals return home to host the Orioles in their first visit to Busch Stadium III since it was built in 2006. St. Louis manager Oliver Marmol has not announced a starter.

Giants: LHP Carlos Rodon (1-1, 4.80 ERA) faces the Rockies in the opener of a three-game series at Oracle Park on Monday.