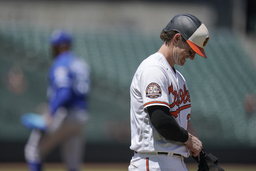 Baltimore has won four of five for the first time this season and finished its homestand 6-4. Kansas City fell to a season-high eight games under .500.

The game was a makeup of Saturday's postponed game to cap a rain-altered series. Friday's game was washed out and made up as part of a doubleheader the teams split Sunday.

Wells (1-2) allowed Ryan O'Hearn's two-out RBI single in the first, but cruised through the rest of his start. He retired 16 of the last 19 batters he faced and struck out three in the longest outing of his major-league career.

The 27-year-old right-hander underwent Tommy John surgery in 2019 and missed all of the 2019 and 2020 seasons, then pitched out of the Orioles' bullpen as a Rule 5 pick last season. He made his sixth start Monday and threw 54 strikes among his career-high 75 pitches.

"Knowing they don't strike out a lot, it's really just kind of making sure I'm mixing up my pitches well, not trying to strike guys out, trying to get quick outs," Wells said. "We have a whole infield and outfield for that."

Kansas City has dropped seven of its past nine games and scored just 22 runs in that span. The Royals were 1 for 6 with runners in scoring position Monday.

"We have to figure out how to put crooked numbers together by just stacking hits on top of each other," Kansas City manager Mike Matheny said. "They're just hard to come by right now."

The Orioles had only four hits in their fifth-inning rally against Royals starter Carlos Hernandez (0-2). A walk, Anthony Bemboom's double and Jorge Mateo's RBI single tied it with one out. Bemboom came around when catcher MJ Melendez's errant throw on Mateo's steal of second sailed into center field.

Hernandez was on the verge of escaping further damage when he struck out Cedric Mullins. But Trey Mancini singled in Mateo, and Hernandez issued a walk and hit a batter before his wild pitch scored Mancini. Ryan Mountcastle then lined a single to score two more runs.

"That inning was a keep-the-line-moving type of attitude," Orioles manager Brandon Hyde said.

Orioles: Mountcastle was in the lineup as the designated hitter after rolling an ankle while stealing second base in the second game of Sunday's doubleheader. "Watching that again, it didn't look good," Hyde said. "We dodged a bullet there."

Baltimore improved to 16-6 at Camden Yards against Kansas City since 2015. The Orioles have won six of their seven home series against the Royals in that span and also split a four-game set last year.

Orioles: RHP Kyle Bradish (0-1, 5.40) will make his third career start and first on the road Tuesday as Baltimore begins a three-game series at St. Louis.