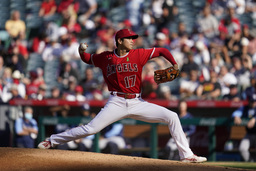 ANAHEIM, Calif. (AP) When the Tampa Bay Rays came back to Angel Stadium the day after going hitless in a 12-0 loss, they had to face Shohei Ohtani.

The impressive way they responded to those daunting circumstances left the Rays encouraged and excited before a long flight home.

Vidal Brujan got an RBI double leading off the 10th inning for his first hit of the season, and Tampa Bay rebounded with a 4-2 victory over the Los Angeles Angels on Wednesday night.

One night after rookie Reid Detmers threw the 12th no-hitter in the Angels' franchise history, Tampa Bay snapped its three-game skid and avoided a series sweep in the finale of a 10-game road trip. The Rays were outscored 23-3 by Los Angeles in the first two games, but they coolly recovered with strong play in every phase.

"You learn a lot about your team coming to the ballpark on days like today," said Kevin Kiermaier, who homered in the second and scored the tiebreaking run in the 10th.

While Brujan and Kiermaier came through with the biggest hits, Shane McClanahan had a career high-tying 11 strikeouts over seven innings of three-hit ball for the Rays, who finished 7-3 on the West Coast after one of their best wins of the season.

"This was a really good team win, a good bounce-back after the last couple of days," McClanahan said. "That's the beauty of baseball. Once the (last) game is over, it's a new day. We have the ability as a team to flush all the bad moments and respond."

The game was a 1-0 pitchers' duel until the eighth with McClanahan barely outpitching Ohtani, who yielded two hits and two walks over six sharp innings.

Although he gave up Kiermaier's homer in the second, Ohtani struck out five on 92 pitches in a strong follow-up at home to his seven dominant innings at Fenway Park last week. Ohtani also got an infield hit and stole second in the fourth inning.

"After you get no-hit, shut out, all of the above, and then you're facing Ohtani the next day is not the easiest thing to do," manager Kevin Cash said. "We knew we had to buy the offense a little bit of time. (McClanahan) did that and then some."

Pinch-hitter Taylor Ward hit a tying two-run homer in the eighth for the Angels, whose three-game winning streak ended with just their fifth loss in 18 games. Los Angeles dropped to 21-12, failing to match the best 33-game start in franchise history.

"We absolutely pitched well enough to win that game, but so did they," Angels manager Joe Maddon said. "The extra-inning rule got us, and that's just the way it's rolling right now, but I have no issues with a 4-2 homestand coming off a really good road trip."

Kiermaier scored from second base in the 10th when Brujan popped a double to left off Aaron Loup (0-2). Brujan, who came up from the minors Tuesday, then stole third and scored on pinch-hitter Harold Ramirez's single.

Brooks Raley walked pinch-hitter Mike Trout with one out in the 10th, but Ward grounded into a fielder's choice before Raley struck out Brandon Marsh with two runners on to wrap up his third save.

Both starting pitchers thrived in Angel Stadium's late-afternoon shadows, which often bedevil batters tracking the ball through sun and shade between the mound and home plate.

"I was able to get it done because there was no shadows at that point," Kiermaier said. "I don't think any of us could see from the third to the seventh (inning). Absolute worst time to start."

Tampa Bay's Taylor Walls singled, stole second, went to third on a bunt and scored on Yandy Diaz's groundout in the eighth.

But with Tyler Wade on first in the bottom half, Ward came off the bench for his first action since Sunday and promptly drilled a two-run homer to left off Andrew Kittredge.

Ward's seventh homer of the season - the Angels' first pinch-hit homer since September 2019 - was the latest feat in the late-blooming outfielder's increasingly impressive campaign.

Angels reliever Jimmy Herget struck out Francisco Mejia swinging in the seventh inning on a pitch that hit the Tampa Bay catcher in the hip.

Rays: Manuel Margot sat out with a right hamstring injury, but the slugger could have played, manager Kevin Cash said. ... Wander Franco was Tampa Bay's designated hitter to give him extra rest.

Rays: After a day off, Drew Rasmussen (3-1, 2.89 ERA) is expected to take the mound at home for a series opener against Kevin Gausman and Toronto.

Angels: After a day off, Los Angeles visits Oakland on Friday for the first of four games in three days. The Halos haven't announced a starter.