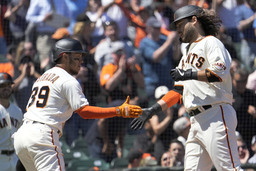 Colorado lost its fourth in a row.

"Obviously, there were several contributions up and down the lineup," Giants manager Gabe Kapler said. "A definite team win."

Added Belt: "It can be anybody on any given day. We rely on each other to go out there and win ballgames. So I think that's what makes us so successful."

Cobb (2-1) limited Colorado to one run on three hits in 5 1/3 innings and struck out six. He won for the first time since his Giants debut on April 12.

"I thought it was good," Cobb said. "I could probably pound the zone a little bit better. I got into a lot of counts where I had to make some pitches and fortunately, I was able to, but it's not a good recipe for success. But I like the way the ball is coming out. I like the shapes that I'm getting and I'll take the results there."

San Francisco handed Rockies starter Chad Kuhl (3-1) his first loss of the season, tagging him for five runs in 4 2/3 innings. It was just the second time in six starts that Kuhl allowed more than one run.

Crawford opened the scoring in the fourth with an RBI grounder. Bart singled home a run and Belt had a sacrifice fly to make it 3-0.

The Giants boosted their lead in the fifth on Crawford's third homer of the season, a two-run drive.

Charlie Blackmon provided the Rockies' lone run in the the sixth on an RBI grounder.

Wade singled home another run for San Francisco in the eighth, finishing 3 for 4 with a walk. Pederson drew a bases-loaded walk.

The Giants have outscored the Rockies 78-28 during the 10-game winning streak, recording at least 10 hits in each game.

"Not much good happened here in San Francisco," Colorado manager Bud Black acknowledged. "We got outpitched, we got outhit. We've got to clean a couple of things up defensively. But we'll bounce back, we'll bounce back. We've got a good group. The guys are frustrated, but that's part of the long season."

Pederson snapped an 0-for-22 drought with an infield single in the seventh inning, his first hit in the month of May. Pederson hit .353 in April with six homers and 10 RBIs.

Giants: LHP Jake McGee (lower back tightness) was placed on the 15-day injured list. ... Wilmer Flores missed his second straight game after being scratched Tuesday with lower back tightness. ... 3B Evan Longoria (finger surgery) returned from the 10-day IL and made his season debut, going 0 for 5 with three strikeouts.

The Giants acquired INF Donovan Walton from the Seattle Mariners for RHP Prelander Berroa and assigned him to Triple-A Sacramento. INF Mike Ford was designated for assignment.

Giants: RHP Logan Webb (4-1, 3.82) opens a three-game series in St. Louis on Friday. Webb has won his last three starts, including a 13-7 victory over the Cardinals on Saturday.