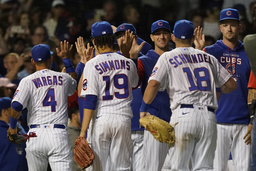 CHICAGO (AP) Willson Contreras led off with a double and became a rare leadoff hitter with a first-inning grand slam as the Chicago Cubs burst to an eight-run lead and beat the Pittsburgh Pirates 9-0 on Monday night.

Contreras became the 10th leadoff hitter since 1901 with a first-inning slam, the first since Houston's George Springer off Kansas City's Edinson Volquez on June 24, 2016. The slam was the 100th homer of Contreras' career, making him the third Cubs catcher to reach that mark along with Gabby Hartnett and Jody Davis. Contreras became the first Cub with two extra-base hits in an inning since Javier Baez on May 1, 2019.

"It's good to know," said Contreras, who was the designated hitter Monday. "It's better to know I'm the third Cub to hit 100 homers as a catcher and making history. It makes me proud."

Wade Miley (1-0) retired his first 14 batters before Michael Chavis lined a single to left and ended a 13-inning hitless streak for Pittsburgh batters. The Pirates didn't get any hits in a 1-0 win over visiting Cincinnati on Sunday and had not gotten a hit since Rodolfo Castro's seventh-inning single during Saturday's 3-1 win.

"Yesterday we just saw a guy with electric stuff," Pittsburgh manager Derek Shelton said of Reds rookie Hunter Greene. "Today we saw a veteran pitcher who works fast and knows how to execute pitches. We got behind, and he did a nice job of that."

Miley started the season on the injured list with elbow inflammation and made his second start with Chicago after he was claimed on waivers from the Reds in November. He allowed one runner in seven innings and struck out six, throwing 83 pitches.

After getting a big early lead, the left-hander worked fast and kept Pirates hitters off balance.

"It was good," Miley said. "I was happy. A lot of runs early. They got a little aggressive (at the plate) and we used that against them a little bit. ... I don't necessarily pitch fast for that reason. The defense loves it. I started doing it in college, but it's more frustrating on them (hitters)."

Miley's previous win was on Sept. 7, 2021 at Wrigley Field when he beat the Cubs as a member of the Reds.

Michael Rucker finished with two-hit relief, and the Cubs won their third straight.

Pittsburgh is batting .223 this season.

Contreras led off with a double off Dylan Peters (3-2) and scored Chicago's first run, then lined his fourth slam to left- center off Bryse Wilson on the first pitch of his second at-bat.

Happ also had two hits in the first as the Cubs chased Peters, who faced seven hitters and retired only two. All five Cubs who reached against Peters scored.

Wilson was charged with the next three Chicago runs.

Contreras got his 100th home run ball back from the fan in the bleachers who caught it in exchange for some other gear. Contreras said he would give the ball to his father for safe keeping.

Cubs: SS Andrelton Simmons was in the starting lineup for the first time with the Cubs after being out with right shoulder inflammation since spring training. The 11-year veteran made his Cubs debut as a defensive replacement in the ninth inning at Arizona on Sunday after being activated from the injured list. Simmons, who signed a one-year contract with Chicago in March, said his shoulder is "OK, but there's room for improvement." ... Manager David Ross said RHPs Marcus Stroman and David Robertson, both on the IL with no designation, continue to make progress, but there's no date for their return.