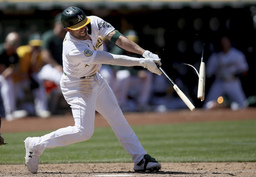 OAKLAND, Calif. (AP) Carlos Correa went 2 for 4 with an RBI double in his return from a stint on the injured list caused by a bruised middle finger on his right hand, and the Minnesota Twins set a season high for runs Wednesday in a 14-4 rout of the Oakland Athletics.

Correa was reinstated from the 10-day injured list after missing 11 games due to an injury sustained when a pitch hit the two-time All-Star while he gripped the bat during a swing.

"It was really nice to get back out there with the guys," Correa said. "Being back out there, it definitely felt like opening day a little bit to me."

Gary Sanchez went 2 for 4 with a double and three RBIs. Luis Arraez, Ryan Jeffers and Gilberto Celestino each drove in two runs.

Gio Urshela, Jorge Polanco, Max Kepler and Nick Gordon also had RBIs for the Twins, who won their first series in Oakland since 2011, stopping a nine-series losing streak. Minnesota took two of three from the A's in a series that drew just 13,884, including 7,106 for the afternoon finale.

"Very solid day all the way around from our offensive group," Twins manager Rocco Baldelli praised. "There was a lot of action. There were a lot of baserunners. That's what we're looking for. We found a way to get them home."

Seth Brown and Christian Bethancourt had RBI singles for the A's, who have lost 11 of their last 13 home games and 15 of 21 overall. Tony Kemp and Luis Barrera also drove in a runs.

Sonny Gray (1-1) limited Oakland to two runs in six innings, striking out five to earn his first career victory against his former team. Gray was drafted by the Athletics and spent his first five seasons in Oakland from 2013-17.

"I'd never beaten the A's before so I really wanted to, selfishly, personally, do that," Gray said.

Jefferies experienced some bicep tightness and underwent an MRI after the game.

"We're going to do some evaluations and we'll have more info for you on Friday," A's manager Mark Kotsay told media.

Every Twins starter except Byron Buxton drove in at least one run. Minnesota went 10 for 17 with runners in scoring position and had nine two-out RBIs.

"I think I'd be good not doing it again, honestly," Pinder laughed. "It was (on my bucket list), one time. I did my one time, and I think I'm good."

The A's failed to homer in the loss, marking their 26th straight game with one home run or fewer, the fourth-longest streak in Oakland history. It is the longest multihomer drought since the record of 32 games set in 2011.

Twins: RHP Chris Paddack underwent Tommy John surgery Wednesday and will miss the rest of the season. ... RHP Bailey Ober, on the 10-day IL since April 29 with a right groin strain, is expected to start one of this weekend's games at Kansas City.

Athletics: LHP Cole Irvin (left shoulder soreness) will make his next start for the A's, though the date has not been determined. Irvin made a rehab start for Class A Stockton on Tuesday, allowing one run in five innings. ... INF Sheldon Neuse returned to the lineup after missing three games with groin tightness. He served as the designated hitter and went 0 for 4.

Twins: LHP Devin Smeltzer (0-0, 1.80 ERA) will make his second start of the season on Friday as Minnesota opens a three-game series in Kansas City. LHP Daniel Lynch (2-2, 3.30) gets the start for the Royals.