Scherzer exits with injury to side, Mets deck Cards 11-4 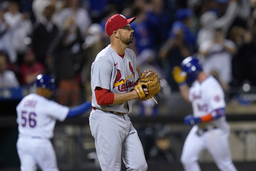 NEW YORK (AP) Max Scherzer had a four-run lead in the sixth inning and everything was rolling right along for the New York Mets - same as all season.

Until the three-time Cy Young Award winner signaled to the dugout he was done.

Scherzer pulled himself from a start Wednesday night with discomfort in his left side before New York finished off an 11-4 victory over the St. Louis Cardinals. He plans to get an MRI on Thursday.

"I don't think this is a major strain," Scherzer said. "I was kind of tight and then all of a sudden it went. But I don't feel like I really ripped it. It just kind of got worse. So hopefully I got out of there quick enough to prevent a major injury here because I know oblique, intercostal, those things can be nasty. Hopefully I avoided a serious injury."

Pete Alonso homered and drove in four runs for the Mets (25-14), already missing ace starter Jacob deGrom and his effective replacement in the rotation, Tylor Megill, because of injuries.

Still, they improved to 13-1 following a loss. The only time they dropped consecutive games this season was April 10-11.

Jeff McNeil had an early two-run single and Alonso snapped a 2-all tie with an RBI single off rookie reliever Jake Walsh (0-1) in a four-run fifth. Dominic Smith singled home a run and Luis Guillorme drove in another with a nicely executed safety squeeze.

Mets batters were hit by pitches three times, increasing their major league-leading total to 28. That includes eight by Cardinals pitchers in six games - the teams got into a bench-clearing melee in St. Louis last month.

Both clubs were warned Wednesday night after Mark Canha was hit near the ribs by a 98 mph fastball from Cardinals starter Jordan Hicks in the third, but there was no trouble between the teams.

"Left a changeup up and he was ready for it," McFarland said. "It's very frustrating, especially with our offense. We need a zero. We had momentum, and it's disappointing that I come in and give up runs like that."

Nolan Arenado hit a two-run homer for the Cardinals in the eighth. Albert Pujols got two hits to pass Eddie Collins for 10th place on the career list with 3,314, including an early two-run single off Scherzer (5-1).

The 37-year-old right-hander left with two outs in the sixth and a 1-1 count on Pujols.

"It's in spasm right now. It doesn't feel real good," he said after the game, chuckling. "But once you get the spasm subside, what's the actual extent of this injury? We don't know. So we'll know tomorrow."

With two runners on, Scherzer threw a slider in the dirt and immediately motioned to the New York bench that he was finished.

"Just felt a zing on my left side and just knew I was done," he said. "When I felt it, I just knew there's no way you can throw another pitch, so just get out of there."

Pitching coach Jeremy Hefner, manager Buck Showalter and a trainer came out to the mound. After a quick discussion, Scherzer walked off the field.

"I don't rush out there, because usually it's not really good news," Showalter said. "He's been a great self-evaluator. He knows when he's at a point where if he pushes more, it's going to turn into something serious.

"He's not going to put himself in harm's way. A lot of guys might have tried to continue to pitch. I'm hoping we caught whatever's in there at an earlier stage of it."

Scherzer threw 61 of his 87 pitches for strikes and left with a 6-2 lead against his hometown team. Adam Ottavino was given all the time he needed to warm up, and he struck out Pujols to end the inning.

The 42-year-old Pujols, who stole second off Scherzer, also grounded out with the score 6-4 and a runner on against Seth Lugo to end the eighth.

Cardinals: Gold Glove 2B Tommy Edman (left calf tightness) was not in the starting lineup after getting hit by a pitch Tuesday night. But he entered in the fifth when SS Edmundo Sosa hobbled off with a mild ankle strain. Sosa was shaken up sliding into second base as he was caught stealing in the previous inning. He is day-to-day. Brendan Donovan shifted from second base to shortstop.

Mets: Nimmo was back in the lineup. The leadoff man fouled a ball off his right knee in the second game of Tuesday's doubleheader and left with a bruised right quadriceps. ... RF Starling Marte is expected to rejoin the team Thursday, but it's unclear if he'll be activated in time for the afternoon series finale. Marte is on the bereavement list following the death of his grandmother.

Player development instructor Jose Oquendo coached third base for the Cardinals in place of Ron "Pop" Warner, who is away from the team to attend his son's high school graduation in the St. Louis area. Oquendo previously spent 18 seasons on the Cardinals' coaching staff, including 16 as third base coach.