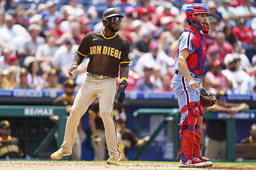 PHILADELPHIA (AP) Yu Darvish put the tying runs on base and the heart of the Phillies lineup was coming up.

With the way Kyle Schwarber and the suddenly silent bats have been swinging, Darvish breezed through the order in the sixth inning without a run allowed, a peak performance for the Padres ace.

Darvish escaped a jam and retired $179 million of offense in Schwarber and Nick Castellanos in a key spot, pitching seven shutout innings to lead the San Diego Padres to a 2-0 win over Philadelphia on Thursday.

The Padres took two of three from the Phillies and moved 10 games over .500 (24-14). The Padres have won five of six road series this season.

Darvish (4-1) struck out five, walked none, allowed six hits and continued a run of solid starts. But it was the veteran right-hander's work in the sixth inning that helped the Padres win the series.

"I asked him how he felt after the sixth and he said he felt fantastic," Padres interim manager Ryan Christenson said.

Darvish allowed one-out singles to Rhys Hoskins and Alec Bohm that put runners on the corners with the Padres ahead 2-0. Schwarber, batting .189, struck out swinging. Castellanos, the cleanup hitter, grounded into an inning-ending forceout.

"I wish I would have got the job done there," Schwarber said. "That's the thing that will sit with you. You've got to put the ball in play. You don't know what can happen from there."

Bryce Harper lobbied hard for the Phillies to sign Schwarber and they gave the outfielder a $79 million, four-year contract. Castellanos got a $100 million, five-year contract. That's $179 million on two sluggers that have gone cold as Harper sits out with a sore elbow. The Phillies were shut out for the fifth time this season.

Harper missed a fourth straight game from the lingering effects of platelet-rich plasma injection in his right elbow. The Phillies hope Harper can return Friday against the Los Angeles Dodgers.

"It's a presence that's missed," Schwarber said. "But it's a team. We all want Bryce in the lineup. He's a staple MVP. We want him in the lineup. When he's not in the lineup, we need to be able to pick that up."

The Padres have won each of Darvish's last six starts since April 17 and he's 4-0 over that span.

"He had all of his pitches working. He was in the zone," Christenson said. "It was just a great game by him."

Luis Garcia got two outs in the eighth. The Padres move to bring in lefty Taylor Rogers to face the left-handed Schwarber backfired when he lined a single up the middle. But Rogers got Castellanos to ground into another forceout to end the inning. Rogers worked the ninth for his 15th save.

Every Padres starter had a hit.

The Padres and Phillies each won 3-0 games in the first two games of the series and this one also had little offense. Robinson Cano lined an RBI single to right -- and nearly took out teammate and baserunner Wil Myers -- off Kyle Gibson (3-2) and Ha-Seong Kim added a sacrifice fly for a 2-0 lead in the fourth inning.

Gibson struck out seven, walked none and gave up eight hits in 5 2/3 innings.

"We've had guys with struggles for a substantial period of time," Phillies manager Joe Girardi said. "Everybody's struggled a little bit. But eventually numbers get back to what's on the back of a baseball card. These guys have some good times coming."

Harper hasn't played right field since April 16 and will remain as DH whenever he returns. He took light swings each of the last two days. OF Mickey Moniak (broken wrist) started a rehab assignment in extended spring training in Clearwater, Florida. SS Didi Gregorius (left knee sprain) has no timeline for a return.

TIP OF THE CAP

Harper seemed to find a hat in the stands a fan was wearing that he liked more than his own Phillies cap. Harper tossed his maroon Phillies hat into the stands and the fan threw his back to Harper for the trade. The fan who claimed he got the hat tweeted it was autographed by Harper.

As concession stand prices soar in all sports, the Phillies scheduled only two $1 hot dogs promotions this season. Sen. Bob Casey of Pennsylvania got the message from fans the team needed more cheap meat and tweeted, "I agree, more Dollar Dog Nights. (at)Phillies, let's do this."

"The Phillies and Aramark work together on the dates. We are planning for another dollar dog night, and we will be announcing that in the near future," the company said in an email.

Manager Bob Melvin plans to return to the dugout Friday night when the Padres open a three-game series at San Francisco, the team said.

Melvin has been away since having prostate surgery on May 11. The Padres said no cancer was found. Melvin will travel to San Francisco on Friday morning and rejoin the Padres for the final three games of a nine-game, three-city trip. That matches the timetable Melvin hoped for when he announced on May 10 that he was having surgery.