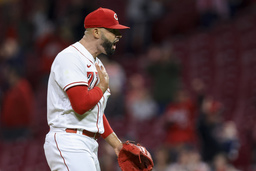 It was an eventful day for the Giants.

Kapler refused to take the field for the national anthem, a demonstration of his frustration with the country's political direction following this week's school shooting in Texas.

Meanwhile, the Reds' Pham slapped Pederson on the field before the game, alleging the Giants outfielder cheated in their fantasy football league. Major League Baseball is investigating, and Pham was scratched after a pregame rain delay of 2 hours, 8 minutes pending the results of that inquiry.

"This is a turn the page situation, first game of a long road trip, this isn't something that gets us down for a minute," Kapler said. "We understand we didn't play our best baseball. We'll shower it off and be ready to compete."

Kapler endured an embarassing moment in the eighth, when he brought in left-hander Jake McGee from the bullpen, then had to replace him because McGee wasn't on San Francisco's lineup card. McGee was reinstated from the IL before the game but had to exit after beginning his warmup tosses on the mound. Left-hander Jose Alvarez then entered the game for San Francisco.

"Our entire staff is incredibly detailed and pays very close attention," Kapler said. "There was a lot going on today and we (messed) it up."

"Graham is tough to hit," Reds manager David Bell said. "Getting ahead with movement. It makes for a tough at-bat. He had one or two strikeouts, but mostly ground balls. That shows the kind of stuff he has."

Matt Reynolds had an RBI double in the third and later scored on a check-swing single by Tyler Stephenson. Brandon Drury added a solo homer in the fifth, his eighth of the season.

Carlos Rodon (4-4) allowed three runs on seven hits. The Giants scored two combined runs over his last two starts, both defeats. He said the timing of the rain didn't help.

Art Warren got five outs for his third save.

Albert Almora Jr. added an RBI double in the ninth for Cincinnati. Later in the inning, a bases-loaded catcher's interference call on Joey Bart allowed Nick Senzel to reach, forcing in the Reds' fifth run.

Reds first baseman Joey Votto was given a day off after seven straight starts since an 18-day layoff with COVID-19. Mike Moustakas started at first base.

"It is awesome to get that first W," Ashcraft said. "It is something I've been working on for a long time. I'm extremely pleased. Strikeouts are great and every thing but a lot of ground balls can keep you in the game longer."

Giants: C Curt Casali is expected to come off the 7-day concussion list Saturday. ... 1B Brandon Belt (right knee inflammation) is eligible to come off the 10-day IL on Sunday but will need a few more days.

Reds: LHP Mike Minor threw six innings in a minor league rehab start and remains on track to rejoin the rotation next week. He's been on the IL all season with a left shoulder strain.

LHP Alex Wood (3-3, 4.82) will start the second game of the series for the Giants. The Reds had not yet named a starter for Saturday and might use an opener.