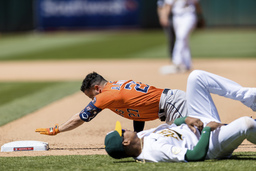 OAKLAND, Calif. (AP) Yordan Alvarez might have been the only person unimpressed by his pair of tape-measure home runs.

Alvarez hit a pair of no-doubt homers, Framber Valdez pitched a two-hitter for a rare complete game and the Houston Astros beat the Oakland Athletics 5-1 on Monday.

After being held to five runs the previous four games, the Astros bats woke up against Oakland ace Paul Blackburn (5-1).

Alvarez hit a 469-foot drive to give Houston its first run in the fourth against Blackburn and added a 444-foot shot to nearly the same spot in the eighth off A.J. Puk for his 14th homer of the season.

"I didn't know how far that was but I know it was way up there," manager Dusty Baker said. "I don't know if I've ever seen a ball hit up there. It was very impressive. He hit the second one too so hopefully he's getting hot."

Alvarez said he believes he could hit it even farther than he did on his first shot and said he didn't take the opportunity to admire it before running the bases.

"Sometimes I would like to do that, but I also have to step on the bases so I would rather do that," he said through an interpreter.

Jose Altuve also went deep with a two-run homer in the fifth that was the 174th of his career, tied with George Springer for fifth most ever by a Houston player.

That was more than enough support for Valdez (5-2), who threw just the seventh nine-inning complete game in the majors this season. He struck out seven, walked three and threw 114 pitches in the longest outing in his five-year big league career. His only other complete game was a six-inning performance in a doubleheader last season.

"He wanted it and we didn't think his health was in jeopardy," Baker said. "So that's why we sent him back out there, saving our bullpen."

Valdez, who won his fourth straight start, didn't allow a hit until Kevin Smith's clean double to left leading off the sixth. He had gotten help from a diving stop by Altuve at second base on a line drive by Elvis Andrus in the fifth.

Ramon Laureano followed with an RBI single in the sixth for Oakland's first run but couldn't generate anything else.

"Valdez is a bulldog," A's manager Mark Kotsay said. "That's a bulldog right there. That guy, a really impressive day on his end. His breaking ball is really a weapon and he's got 95 (mph) at pitch 112 in the ninth inning I think. Tough day for us offensively."

Blackburn had been even better than Valdez of late, coming into the game with a 1.70 ERA and allowing only one homer in 47 2/3 innings.

That success didn't continue against the Astros with Alvarez delivering a no-doubt shot halfway up the right-field stands that Laureano didn't even turn to look at.

Martin Maldonado added an RBI single in the fifth before Altuve's homer as Blackburn allowed a season-high four runs in 6 2/3 innings.

The two long homers marked the 22nd time since 2015 that a player hit a pair of homers that traveled at least 440 feet in the same game, according to Sportradar. The last player to do it was Aaron Judge on Sept. 30, 2021, against Toronto.

There was a scary moment in the seventh inning when Altuve and Christian Bethancourt collided at first base. Altuve hit a grounder to third and Chad Pinder's throw to first was high. Bethancourt leaped to try to make the catch and Altuve ran into him as he hit the base. Both players went down immediately and trainers for both teams rushed onto the field.

Altuve was replaced on defense in the bottom of the eighth to be evaluated for a possible concussion after Baker said he "didn't look too good in the eye."

Athletics: Smith bruised a knee making a diving catch in foul territory in the third inning and was replaced by pinch-runner Seth Brown after his double in the sixth. He is day to day.

RHP Cristian Javier (3-2, 2.43) starts the middle game of the series for Houston against A's RHP Frankie Montas (2-4, 3.28). Javier matched his career high with nine strikeouts in his last start against Cleveland last Wednesday. Montas is 0-3 in his last seven starts despite a 3.12 ERA in that span.