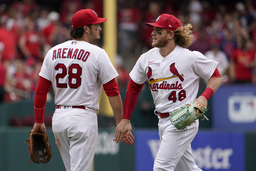 Nick Wittgren earned his first save as a Cardinal by getting the last out of the game when he retired pinch-hitter Robinson Cano on a fly ball with the bases loaded. The Cardinals have won five of six games. The Padres have lost four of five.

"I've done that quite a few times in my career, come with the bases loaded," Wittgren said. "It never gets old. You want the ball in your hand as a reliever."

Paul Goldschmidt extended his hitting streak to 23 games and reached safely for a career-best 37th consecutive game. Goldschmidt went 1 for 2 with two walks and two runs scored. He is hitting .353 this season.

Hudson (4-2) gave up a run in the first inning but shut out the Padres over the next six innings. He allowed one run on four hits with a walk and three strikeouts. At one point, Hudson retired 18 consecutive hitters.

"He stepped it up and gave us exactly what we needed," St. Louis manager Oliver Marmol said.

"I thought everything was working pretty good," Darvish said through a translator. "I couldn't locate the fastball to Arenado and we got hurt there."

Arenado's 10th home run came after Goldschmidt extended his hitting streak with a one-out single in the sixth. Arenado sent an 0-1 fastball over the left-field fence, giving St. Louis a 3-1 advantage.

"Today it was just cool to get back-to-back hits," Arenado said about him and Goldschmidt. "When he's swinging it, I'm not swinging it. It felt great for me individually. But it felt good today is help us out."

In the eighth, Arendado chased Darvish with a run-scoring single with two outs. He scored on a double by Juan Yepez, who drove in two runs.

Yepez' first RBI made it a 1-1 tie in the fourth. His sacrifice fly scored Goldschmidt, who drew his second walk to begin the inning. He went to third with aggressive baserunning on a single by Arenado.

San Diego scored a run in the first on an RBI single by Manny Machado. Jurickson Profar led off the game with a double.

The Padres' second run came in the ninth on a one-out homer by St. Louis native Luke Voit off reliever Kodi Whitley. It was Voit's first homer off St. Louis, which drafted him in 2013.

"When you're dealing with a small margin for error with us not scoring much offensively, it makes it a little more difficult," Padres manager Bob Melvin said.

CF Harrison Bader dived head first and hit the grass as he caught a shallow fly by Ha-Seong Kim in the first inning with two outs and runners on second and third base.

Padres: OF Matt Beaty (left shoulder impingement) was temporarily shut down in his rehab assignment and was sent to the team's training facility in Arizona.

Cardinals: 2B Nolan Gorman (lower back tightness) missed his second consecutive game. The 22-year-old rookie is hitting .387 since he joined the club May 20. He can swing a bat but bending over to field causes some pain. ... LHP Steven Matz (shoulder impingement) has played catch twice. His likely next move will be to throw two side sessions. If there are no setbacks, Matz may have a short rehab outing or return to the Cardinals on a limited-pitch basis. ... RHP Alex Reyes (shoulder) was slated to undergo surgery Wednesday that's likely to end his season.