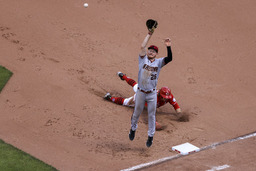 CINCINNATI (AP) With one out in the ninth inning and the Diamondbacks trailing by a run, Josh Rojas worked Reds reliever Tony Santillan to a full count and looked for another fastball.

Santillan - who already had hurt himself with a wild pitch and a throwing error in the inning - gave him what he wanted, serving up a 97 mph four-seamer down and away to Rojas, who hit it past a drawn-in infield to score two runs.

"I went up there with a with the approach to stay on the heater and react to the slider," Rojas said after the 5-4 win that earned the Diamondbacks a split of the four-game series. "He actually threw me a first-pitch slider, I got a good swing on and fouled it off. Once I did that, I felt pretty comfortable to stay on the heater and try to drive something. I got put in a really good situation."

The Diamondbacks went into the ninth trailing 3-1, but got help from Santillan's wild tosses.

Pavin Smith drew a leadoff walk, went to second on a wild pitch by Santillan (0-1) and scored on Alek Thomas' single. Santillan then threw away a bunt for an error, and a sacrifice set up the two-run single by Rojas, who later scored on a grounder.

The blown lead by the Reds wasted a solid pitching performance by starter Tyler Mahle, who allowed one run and four hits with a season-high 10 strikeouts over six innings. His biggest mistake was a fastball left in the middle of the zone that Smith snuck just inside the right-field foul pole for a homer leading off the Arizona fifth.

Mark Melancon (2-6), the second of three relievers for the Diamondbacks, got the win. Ian Kennedy pitched the ninth for his fourth save, despite allowing Matt Reynolds' solo homer.

"That's the beauty of this team," Arizona manager Torey Lovullo said. "They've got a great heartbeat. There was never any panic in the dugout. We felt like if kept scratching and clawing and we got into their bullpen, we'd give ourselves a chance. Their starting pitcher was very good."

The Reds scored three in the first inning when TJ Friedl, Brandon Drury and Tommy Pham each singled to load the bases with no outs and Joey Votto doubled home two runs. Kyle Farmer added a sacrifice fly.

The Reds were relatively quiet after that. Zach Davies went six for the Diamondbacks, allowing six hits while striking out seven.

A foul ball in the fourth inning broke the right thumb of Reds catcher Tyler Stephenson, who is expected to miss four to six weeks. The 25-year-old Stephenson missed time with a concussion already this season but is hitting .305 and is one of team's most productive players. Speculation was that Stephenson would be the Reds' representative to the All Star Game.

"I have never had anything broken or fractured before," he said. "I didn't know what to expect. I knew it didn't feel good. It is tough, but it will be fine. Frustrating. You live and learn. You have to find the positives."

Diamondbacks: DH Christian Walker left the game after he was hit in the helmet by a fastball from Alexis Diaz in the eighth. Lovullo said he's expected to be OK. ... RHP Luke Weaver (elbow) will be evaluated on Friday for a potential start on Sunday.

Reds: Drury was back in the lineup after missing Wednesday's game with soreness in his right Achilles tendon. ... CF Nick Senzel, scratched from Wednesday night's game because of a strained back, is expected to miss another day or two. ... INF/OF Max Schrock (left calf strain) may return to the lineup as early as this weekend.

The Reds recalled INF Colin Moran from Triple-A Louisville and sent RHP Jared Solomon back down. Moran started at first base, with Votto handling the DH duties.

Diamondbacks: Scheduled to start LHP Madison Bumgarner (2-5, 3.64 ERA) in the opener Friday of a weekend series at Philadelphia. Bumgarner pitched four innings against the Reds on Monday, allowing four runs and eight hits. RHP Zack Wheeler (4-3, 3.14 ERA) is the probable starter for the Phillies. Wheeler surrendered two runs and six hits through six innings with nine strikeouts in beating the Los Angeles Angels on Saturday.

Reds: RHP Luis Castillo (1-3, 3.55 ERA) is the scheduled starter in the Friday opener of a weekend series at St. Louis. He'll face RHP Andre Pallante (1-0, 1.23 ERA). Castillo allowed five runs and six hits while striking out six through 6 1/3 innings in Sunday's 5-4 loss to Washington. Pallante gave up a run and four hits through four innings in Saturday's 7-4 win over the Chicago Cubs.