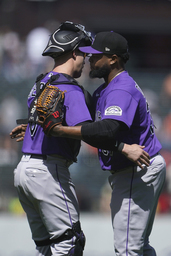 San Francisco made a season-high four errors, including a pair in the fourth by second baseman Thairo Estrada.

"It's a really tough league when you're not converting ground balls into outs," Giants manager Gabe Kapler said.

Charlie Blackmon had three hits for the Rockies, who are 3-6 against the Giants this season.

Blackmon reached leading off the fourth when Estrada, standing on the right field grass as part of a shift that had three infielders on the right side, dropped his line drive.

C.J. Cron singled between shortstop and second base, then took second when center fielder Austin Slater airmailed the throw off the fencing in front of the third-base dugout for an error.

Brendan Rodgers' RBI single off Logan Webb (5-2) cut the Rockies' deficit to 2-1. With the infield at double-play depth, Ryan McMahon hit a hopper that kicked off the heel of Estrada's glove for another error.

"It was a weird inning," Webb said. "We're all human. Stuff happens. Unfortunately, it was kind of back-to-back-to-back. We couldn't get back in the game after that."

Daza's single put the Rockies ahead 3-2, and McMahon added a run-scoring single in the seventh against Tyler Rogers.

"This is a place that I have not had my best outings in the past, so for me, it was kind of just time to put a stop to it," Gomber said. "That was just kind of the mindset I went out with today."

Alex Colome pitched a one-hit ninth for his third save in four chances, retiring Joc Pederson in a game-ending double-play grounder.

"I like the way the guys came out this morning and worked prior to the game," Rockies manager Bud Black said. "There was great energy as always, but it was a little bit different."

Austin Wynns, acquired a day earlier from Philadelphia went 2 for 2 with an RBI in his Giants debut. The catcher also threw out McMahon attempting to steal second base in the second inning.

San Francisco had won 18 consecutive home starts by Webb since a loss to the Los Angeles Dodgers on Aug. 27, 2020, which matched the Giants team record.

Estrada tripled in a run in the second and scored on Wynns' single.

Colorado's Connor Joe went 0 for 4 but walked in the seventh to extend his on-base streak to 35 games, the second-longest active streak in the majors behind the St. Louis Cardinals' Paul Goldschmidt at 45.

Giants: SS Brandon Crawford (right quadriceps tightness) was held out of the starting lineup for a second straight day but recorded a pinch-hit single in the ninth inning. ... OF LaMonte Wade Jr. (left knee inflammation) began a rehab assignment with Triple-A Sacramento on Thursday. ... 1B Brandon Belt (right knee inflammation) is nearing a return from the injured list but is not expected to play in Friday's series opener against the Dodgers.

Rockies: RHP Chad Kuhl (4-2, 3.17 ERA) opens a three-game series in San Diego on Friday, the first of 19 meetings between the Rockies and Padres this season.

Giants: RHP Jakob Junis (3-1, 2.51) faces the Dodgers for the first time in his career on Friday as San Francisco welcomes Los Angeles for a three-game series. Junis has allowed two runs or fewer in seven of eight starts this year.