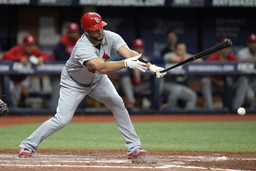 McClanahan (7-2) allowed one unearned run, two hits, walked one and struck out nine, The lefty, who leads the majors with 98 strikeouts, has given up just five runs over 40 innings in his last six starts.

"I think he's putting himself in a category here through two months of the season - pretty special category," Rays manager Kevin Cash said.

It was the first time McClanahan has pitched into the eighth inning.

Jason Adam worked the ninth to get to his second save

The right-hander was the first St. Louis pitcher to have a complete game and lose since Adam Wainwright on April 26, 2021, against Philadelphia.

"I thought Miles actually outpitched him if you ask me, but Shane has something for you," St. Louis manager Oliver Marmol said. "He's (McClanahan) got electric stuff. He did a phenomenal job. Miles also did a really nice job. That was a plus-outing there."

Marmol said the Cardinals had six or seven balls hit at over 100 mph that were right at people.

"The guys behind me made a lot of great plays," McClanahan said. "I owe a lot of success to them."

With both pitchers in control, the game at Tropicana Field was played in 1 hour, 54 minutes.

Mikolas retired his first nine batters on just 27 pitches before running into trouble during the fourth.

Kevin Kiermaier had a leadoff single and scored on Choi's one-out homer that made it 2-0. Choi has a nine-game hitting streak and has driven in 10 runs over the stretch.

The Cardinals got within 2-1 in the sixth after an error by McClanahan.

Paul Goldschmidt extended his career-best on-base streak to 45 games with a two-out walk and went to second when Nolan Arenado singled for the Cardinals' second hit.

Albert Pujols hit a soft comebacker that McClanahan failed to catch barehanded. McClanahan recovered, but made an errant throw to first that allowed Goldschmidt to score.

"I just rushed it," McClanahan said. "I knocked it down, my momentum was taking me one way and I thought I had not as much time as I did and just rushed the throw,"

Pujols picked up his 1, 374th extra-base hit in the second when Rays second baseman Vidal Brujan overran his pop fly in shallow right field for a double. Pujols is now three extra-base hits away from tying Cardinals great Stan Musial for third place on the all-time MLB list.

The Rays played a video tribute before the top of the third honoring St. Louis stars Yadier Molina and Pujols, who are both retiring after this season.

"I think both of them have meant quite a bit to the game," Cash said. "You marvel at their careers. Look at Yadier Molina (39) and Albert Pujols (42) the age they are, they kept themselves in that shape to be able to compete at his level still is just remarkable."

Both jumped over the railing of the third-base dugout after the video to acknowledge a standing ovation.

Rays: Reliever Andrew Kittredge was placed on the 15-day IL and is expected to have surgery to remove a loose body in his right elbow.