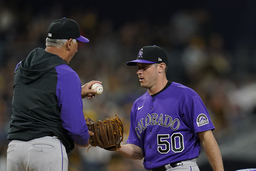 Musgrove (7-0) allowed four hits and two walks, dropping his ERA to 1.50 and taking over the lead from the Texas Rangers' Martin Perez (1.56). Musgrove has allowed one run in his last 27 innings.

"We talked about using the fastball more. Obviously I went out there and still threw breaking balls. I relied on the fastball more as the game went on," Musgrove said. "I feel like I am playing a different game than I ever have before, mentally more than anything."

San Diego is 10-1 when Musgrove starts, and his streak of 11 starts with six or more innings is the longest in team history

Colorado put runners on second and third in the fourth inning before Musgrove retired Randal Grichuk on a groundout.

"Our offense is playing up a little bit knowing when I'm out there we only need a couple of runs and I am able to hold the game within reach," Musgrove said. "They have done a really good job of getting me runs early in the game, letting me open up the arsenal."

Manny Machado hit his 10th homer on the ninth pitch of an at-bat against Chad Kuhl (4-3), Jake Cronenworth had a two-run double and Nomar Mazara had three hits as San Diego won for the sixth time in seven games.

"My swing is probably the most consistent that it has been in my career," Mazara said.

The Padres have scored 29 runs in their last three games - five more than in any previous three-game stretch this season.

Colorado has lost six of eight and dropped to 9-17 on the road - the Rockies are 16-16 at mile high Coors Field. Colorado failed in its attempt to win consecutive games for the first time since May 4-5 against Washington.

Trent Grisham hit an RBI double in the second and scored on Austin Nola's single for a 2-0 lead.

Machado homered in the third, and Cronenworth boosted the lead to five runs with his double in the fourth. Cronenworth has 16 RBIs in his last six games.

"We are playing like we are capable of," Cronenworth said.

Padres: RHP Robert Suarez had arthroscopic surgery to remove bone chips in his right knee on June 9 and likely won't throw until early July. ... RF Wil Myers had an MRI on his right knee and the team expects him to avoid surgery and try four-to-six weeks of rehab.

2B Robinson Cano, designated for assignment last week, agreed to a minor league contract and will report to Triple-A El Paso. Cano, a .301 career hitter and eight-time All-Star, hit .149 in 77 at-bats with the Padres.