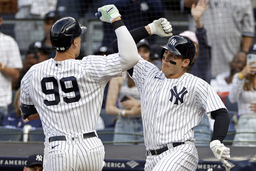 Batting leadoff for the fourth time this year, Judge hit his second career leadoff homer, sending a 1-0 fastball from Swarmer (1-1) into the left field seats. Judge added his major league-leading 24th, one of three home runs in the fifth.

"It's fun, I don't mind leading off," Judge said. "It doesn't matter if I'm leading off or hitting second."

Stanton hit a 436-foot drive off the facing of the left-field second deck in the fourth for his 360th homer - one shy of Joe DiMaggio. Stanton's 119.8 mph drive was the hardest-hit home run in the major league this season. Of 42 homers hit 119 mph or higher since Statcast began tracking in 2015, Stanton has 31.

"It's quite a sight," Judge said of Stanton. "You try to soak it all in the moment because when he hits one like that you don't see that every day."

Stanton's drive was the hardest hit in the majors since he had a 120.3 mph single Sept. 16 in Baltimore.

"You hit the ball on the barrel, I feel like when anyone squares the balls up, it's a cool little euphoric feeling," Stanton said.

New York leads the majors with 94 home runs and is 23-1 when Judge and Stanton both homer, including 7-0 this year. The Yankees are a major league-best 43-16.

Jordan Montgomery (2-1) allowed five hits in seven innings, struck out five, walked none and got 12 outs via ground balls.

"It was going to be a struggle if we didn't get a lot of length from him," Boone said. "That was just what the doctor ordered.

Ron Marinaccio and Lucas Luetge pitched a hitless inning each, and the Yankees tied the Mets for the big league lead with their ninth shutout - the Yankees' most at this point of the season since 1967.

Chicago lost its fifth straight, matching its longest skid this season, and at 23-35 dropped a season-worst 12 games under .500. Schwarmer allowed six runs and seven hits in five innings in his third career start, his ERA rising from 1.50 to 4.24.

"The Yankees have some powerful swings, some big strong guys," Cubs manager David Ross said. "They have the potential to put up some numbers with one swing."

The six homers allowed were the most off a Cubs pitcher since Tom Lee on June 28, 1884. Schwarmer became the second big league pitcher to give up six solo homers after the Brooklyn Dodgers' Hollis "Sloppy" Thurston at the New York Giants on Aug. 13, 1932.

"I was getting behind hitters sometimes and leaving the ball up in the zone," Swarmer said.

The Cubs have gone hitless in 40 at-bats with runners in scoring position since Patrick Wisdom's RBI double in the eighth inning Sunday against St. Louis.

Torres followed Stanton's drive by homering for the second straight night and with 12 this season matched his total for 2020 and 21 combined. Seven of his homers have been to right field.

Trevino raised his average to .309 with three hits and tied his career best with five home runs in 102 plate appearances, a total he reached in 302 with Texas last year.

After Stanton and Torres went back-to-back, Trevino hit a drive off the left field foul pole in the sixth. Judge homered into the left-center field seats two batters later. Rizzo made it 6-0 when he homered into the right field seats and flipped his bat before completing his trot around the bases.

Isiah Kiner-Falefa had an RBI single and Judge added a sacrifice fly in the sixth.

Morel went 0 for 4 and saw his on-base streak to start his career end at 22 games. It was the longest by a Cubs rookie and the longest by a first-year player since Minnesota manager Rocco Baldelli opened his career by reaching in 24 straight for Tampa Bay in 2003.

Cubs: Placed LHP Wade Miley on the 15-day IL with a left shoulder strain. Miley was activated Friday but lasted three innings before exiting. Seiya Suzuki remained on the IL with a sprained left ring finger. He took batting practice and could be activated Sunday. . 2B Nick Madrigal (groin tightness) was held out of the starting lineup. . RHP Michael Rucker was recalled from Triple-A Iowa to replace Miley.