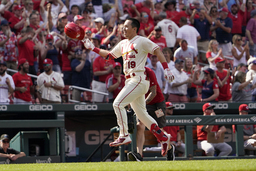 ST. LOUIS (AP) Tommy Edman hit a two-run homer with two outs in the ninth inning for the first walkoff RBI of his major league career, lifting the St. Louis Cardinals over Cincinnati 5-4 on Saturday in yet another Reds bullpen collapse.

"Off the bat, I honestly didn't think it was going to get out," Edman said. "I was a little surprised when I saw it bounce in the bullpen, but obviously super-excited when I saw it finally get over the wall."

Paul Goldschmidt's streak of reaching base ended at 46 games with an 0-for-4 day for the NL Central-leading Cardinals.

St. Louis pitcher Adam Wainwright and catcher Yadier Molina made their 316th start together, tying the Boston and Milwaukee Braves' Warren Spahn and Del Crandall for second-most behind the 324 of Detroit's Mickey Lolich and Bill Freehan.

Wainwright, 40, was matched up against Cincinnati's 22-year-old Hunter Greene.

Cincinnati led 4-1 in the eighth inning but blew a save for the seventh time in 17 chances, and the Cardinals won despite getting outhit 12-7.

"Guys competed so well, put us in a great position to win the game," Reds manager David Bell said. "Really, our bullpen did a nice job to get us into that situation. I know it doesn't always come down to one play, but certainly you feel responsible when you have a decision like that to make."

Tyler O'Neill, who had three RBIs, hit a two-run double off Hunter Strickland that pulled St. Louis to 4-3 in the eighth.

Joel Kuhnel (0-1), a 27-year-old rookie right-hander, walked Dylan Carlson leading off the ninth but got Molina to ground into a double play.

Juan Yepez singled and Edman reached down for a slider at the knees, driving the ball to right-center for his sixth home run and giving the Cardinals their third walkoff win this season.

"I really enjoyed it," Cardinals manager Oliver Marmol said. "He took a good swing right there. We did have some opportunities, came up short a couple times, but kept taking our shot. It's part of the game. Sometimes it works out. Sometimes it doesn't. Heck of a swing by Tommy."

St. Louis (34-26) won the first two games of the three-game series and sent the NL-worst Reds (20-39) to their fourth straight loss and seventh defeat in nine games. The Cardinals have won 14 of their last 22.

Nick Wittgren (1-0) pitched a one-hit ninth for his first win with St. Louis.

Greene gave up one run, two hits and two walks with seven strikeouts before being pulled after allowing the first two batters to reach base in the sixth. He topped 100 mph with five pitches and averaged 98.7 mph with his fastball.

"He's doing a nice job of adapting as the start goes and adjusting to the hitters as they adjust to him," Bell said. "We've seen that really most of the season now. It continues to be impressive."

Tommy Pham put the Reds ahead with a two-run double in the third off Wainwright, his former teammate, and scored on Kyle Farmer's single for a 3-0 lead.

O'Neill hit a sacrifice fly in the sixth and Alejo Lopez, who had replaced an injured Colin Moran, hit an RBI single off Drew VerHagen in the eighth for a 4-1 lead.

Cardinals CF Harrison Bader was removed after six innings for what Marmol said was lack of hustle.

"I had a great conversation with him. He respected it," Marmol said. "There's expectations when it comes to effort. It wasn't met today. He'll be back in tomorrow."

Marmol did not specify any play.

"We'll handle it internally but he understood it, he respected it, and he'll be back in there tomorrow," the manager said.

Cincinnati claimed OF Stuart Fairchild off waivers from San Francisco and optioned him to Triple-A Louisville. RHP James Marinan was designated for assignment.

Reds: Moran left in the bottom of the seventh after getting tangled with Dylan Carlson on a tag at first. Moran veered into Carlson's path trying to field an errant throw from second baseman Matt Reynolds. "Just kind of a blow to the back, more of almost a whiplash type of action," Bell said. "He's okay. He's going to be fine but obviously we'll keep a close eye on it."

Cardinals: LHP Steven Matz (left shoulder impingement) threw long toss in the outfield prior to the game. "He's still feeling a little bit of that discomfort in the impingement," Cardinals president of baseball operations John Mozeliak said. "Until you get past that hurdle, you're not really cleared to take that next step forward. I know he's going to be reassessed by our medical staff and, hopefully, he's able to resolve that."

RHP Dakota Hudson (4-2, 2.76 ERA) is 6-0 against Cincinnati going into Sunday's start, joining David Weathers (8-0) as the only pitchers since 1901 with at least six decisions against the Reds and a perfect winning percentage. RHP Graham Ashcraft (3-0, 1.14 ERA) will be making his fifth career start in Sunday's series finale.