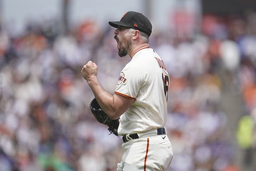 Austin Slater and Mike Yastrzemski homered off Julio Urias in the first inning to send the stumbling Dodgers to their sixth loss in eight games.

"As a team we played really well today defensively, scored the runs we needed and the bullpen did a great job," Rodon said. "It's big. That turns it around for us a little bit."

Chris Taylor doubled twice for Los Angeles, but was forced out of the game after suffering a cut near his right eye when he crashed into the fence in left field trying to make a catch.

The Dodgers remained one-half game ahead of San Diego in the NL West. The Giants pulled within 3 1/2 games of first place.

"It's a solid position to be in," Giants manager Gabe Kapler said. "But everybody has been around the game long enough to know that divisions aren't won in June and they're probably not lost very often in June, although it happens."

Before the game, Dodgers manager Dave Roberts called out his club's offense as being too inconsistent, a problem that has hindered the team since the final week of May.

Rodon (5-4) helped that trend continue with a dominant performance coming on the heels of one of his worst starts this season.

Mixing a fastball that topped out at 100 mph with an effective slider, Rodon had six strikeouts and pitched around three walks and a pair of leadoff doubles for his win in more than a month.

"He did a really nice job of attacking the zone with his fastball," Kapler said. "The velo spike was certainly encouraging. He pitched the type of ballgame that we expect from Carlos and what we saw earlier in the season."

John Brebbia and Dominic Leone retired three batters apiece. Leone got Taylor to strike out swinging with runners at the corners and two outs in the eighth, then yelled and flexed his arms while walking off the mound.

Jake McGee pitched the ninth for his third save.

Urias (3-6 ) struck out 10 in six innings but remained winless since May 20. The Dodgers left-hander didn't walk a batter and set down 15 straight following Yastrzemski's home run with one out in the first.

Yastrzemski's home run came two batters after Slater's third career leadoff home run. Slater also made a running catch in right-center to take away a hit from Will Smith in the eighth.

On the next play, Slater raced behind Yastrzemski to retrieve the ball and hold Justin Turner to a single after Yastrzemski dove and missed.

"I felt pretty good about how I moved around the field," said Slater, who exited Saturday's game after fouling a ball off himself. "Defense was going to be a question mark going into the game and as the game went on it kind of loosened up and felt better."

RELIEF FROM THE BULLPEN

Giants relievers allowed one run over 16 innings during the series, including three scoreless on Sunday.

"I'm not surprised," Leone said. "We did it last year and we've got the same group back. Not much has changed. We just have to get the ball rolling."

The Giants held a pregame ceremony honoring the 10th anniversary of Matt Cain's perfect game on June 13, 2012, the first in franchise history. Cain watched as highlights of the game played on the video scoreboard, then threw out the ceremonial first pitch to former teammate Brandon Crawford.

Dodgers: RHP Blake Treinen played catch and made more than 60 throws as he works his way back from an undisclosed shoulder injury. Roberts noted that Treinen was fatigued but pain free afterward.

Giants: RHP Anthony DeSclafani (right ankle inflammation) threw 41 pitches in three scoreless innings of a rehab start with Triple-A Sacramento on Saturday night.. . Curt Casali was held out because of a tight hamstring. 3B Evan Longoria, who flew out as a pinch-hitter in the seventh, has also been slowed by a sore hamstring. . OF LaMonte Wade Jr. will have his left hamstring re-evaluated Monday.

Dodgers: Following an off day, RHP Tony Gonsolin (7-0, 1.58 ERA) will pitch against the Angels on Tuesday. Gonsolin has had at least five strikeouts in each of his seven previous starts.