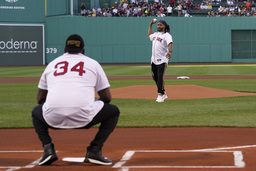 BOSTON (AP) Jarren Duran and Josh Winckowski have been living out of temporary metal lockers in the middle of the home clubhouse at Fenway Park, a sign that the two Triple-A callups might not be in Boston long.

But for now it's hard to picture the Red Sox winning without them.

Duran had two hits, two stolen bases and two runs, and Winckowski had the longest start of his short career on Monday night to help Boston beat the Detroit Tigers 5-2. In three major league appearances, Winckowski has pitched three innings, five innings and into the seventh.

"Last outing, I drove up here the day of the game," said the 23-year-old right-hander, who earned himself another turn through the rotation. "Being able to be up here the last five days was huge."

Franchy Cordero had three hits, including a two-run single, and Boston won for the sixth time in eight games to climb to a season-high six games above .500. Duran doubled and scored on Rafael Devers' double to break a third-inning tie.

"He's been like that all year," said Winckowski, who was also with Duran in Triple-A Worcester. "All the guys in Triple-A are watching him and they're like, `How do you keep this guy here.'"

Duran could be headed back to the minors when Christian Arroyo and Kike Hernandez return from the injured list.

Winckowski (2-1) allowed two runs on seven hits and a walk, striking out two in 6 2/3 innings. Tanner Houck pitched the ninth for his fifth save.

Alex Faedo (1-4) lasted just 4 1/3 innings for the Tigers, who had won two straight after losing six in a row. The 26-year-old right-hander allowed five runs - four earned - on eight hits and two walks, striking out two.

The Red Sox took a 1-0 lead in the first when Duran drew a leadoff walk, stole second and scored on J.D. Martinez's single. After the Tigers tied it in the top of the second, Duran and Devers hit back-to-back doubles to make it 2-1.

Boston added one in the fourth before Alex Verdugo singled with one out in the fifth and Trevor Story doubled him to third to chase Faedo. Cordero lined Tyler Alexander's first pitch to center to make it 5-1.

With the new limit of 13 pitchers, the Red Sox called up infield prospect Jeter Downs from Triple-A Worcester and designated right-hander James Norwood for assignment. The Red Sox acquired Norwood for cash from the Phillies on Saturday, but he didn't get into a game.

Downs, who did not play, was acquired from the Los Angeles Dodgers in the Mookie Betts trade. He was batting.180 in Triple-A.

Former Red Sox left fielder Manny Ramirez was at the game to receive the plaque for his admission to the team's Hall of Fame. Teammate David Ortiz presented it to Ramirez on the field before the game. Ramirez also sat in on the TV broadcast, while Ortiz took a seat next to the Red Sox dugout and did his best to distract manager Alex Cora.

"At one point we've got to sit David somewhere else," said Cora, who gave Ortiz bags of sunflower seeds to slow down the chatter. "It's nonstop. It's not Fort Myers, bruh."

Ramirez played for the team from 2001-08 and was the World Series MVP in 2004, when the Red Sox won their first championship in 86 years. He wasn't in town when the Red Sox inducted him into the franchise Hall of Fame, along with Ortiz, in May.

"He's the only guy that misses his Hall of Fame induction and comes to throw out a first pitch on a Monday," Cora said.

But while Ortiz earned enshrinement in the Cooperstown Hall of Fame on the first ballot, Ramirez has never gotten more than 28.9% of the vote, likely because of two suspensions for performance-enhancing drugs.

Red Sox: LHP Chris Sale made a rehab start against the Rays in the instructional league in Port Charlotte, Florida. He went one inning, allowing one run on a hit and a walk and a wild pitch.

The strikeout was Rays star Wander Franco, who is also on a rehab assignment. Sale, who broke a rib working out during the lockout, hasn't faced a batter in the majors since October.

LHP Rich Hill (2-4) will start for Boston against Detroit RHP Beau Brieske (1-5) in the middle game of a three-game series.