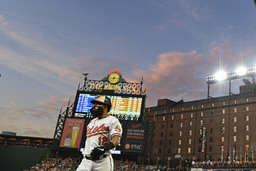 Cesar Hernandez doubled on the game's first pitch from Jordan Lyles (4-6) and scored on a double by Nelson Cruz to put Washington in front. Hernandez added an RBI grounder in the second inning.

That was enough of a cushion for Fedde (5-5), who struck out four, walked one and did not allow a runner past first base. Two his Fedde's 20 career wins have come against the Orioles, against whom he has 0.52 ERA in three career appearances.

Fedde lamented using 97 pitches to get through six innings, but he had no complaints about the result.

"It's awesome," Fedde said. "Anytime you take six scoreless, I'll sign up for that."

Manager Dave Martinez liked it, too,

"He did well. He got ahead of a lot of hitters, and when he needed to throw a strike, he threw a strike," Martinez said.

Kyle Finnegan worked the seventh, striking out the side around a double by Adley Rutschman. Carl Edwards Jr. pitched the eighth and Tanner Rainey completed the four-hitter for his eighth save.

"Our bullpen came in and did a great job," Martinez said. "It's pretty impressive that after everything we've been through, we come out here and our pitchers throw a shutout."

Washington's eight-game losing streak, which included seven defeats at home against division foes Atlanta and Philadelphia, ended with a 9-3 rout of the Phillies on Sunday. Now the Nationals are riding their first winning streak since June 10-11.

Lane Thomas smacked a solo shot for Washington in the ninth.

After being scratched Sunday with a stomach virus, Lyles struggled through the first two innings before settling in. The right-hander gave up two runs and five hits over 6 1/3 innings.

But he received no support from his offense.

"I thought Fedde threw the ball extremely well. He really pitched to the edges well," Orioles manager Brandon Hyde said. "We helped him out by chasing. We just didn't square many balls up. I think our at-bats for the most part these past few weeks have been really good (but) tonight we just didn't have a lot of hard contact."

This rivalry between neighboring teams was far more intense back when both were contenders. Now, Baltimore is in the AL East cellar, Washington is last in the NL East and the announced crowd of 15,197 appeared to include only a handful of Nationals fans who made the 40-mile trek from the nation's capital.

Cruz has been swinging a hot bat following a slow start in his first season with Washington. The 41-year-old DH was hitting .143 on May 3, but now he's at .250 and has amassed 26 RBIs in his last 40 games.

Nationals: Activated INF Alcides Escobar (right hamstring strain) from the injured list. The 35-year-old last played on May 31. To make room, the Nationals optioned RHP Cory Abbott to Triple-A Rochester. ... RHP Victor Arano (left knee inflammation) is throwing from a chair but not ready to go full-tilt. "Today is the first time I saw him walking without a limp, so that's great," Martinez said.

Orioles: Trey Mancini returned to action as Baltimore's DH after missing four of six games with soreness in his right hand, an injury that occurred June 13 when he was hit by a pitch in Toronto. ... It's been a slow recovery for INF Ramon Urias, who went on the IL on June 11 with a left oblique strain. "We're hoping he can swing the bat real soon," Hyde said.