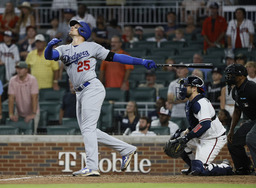 A deflection by Atlanta third baseman Austin Riley changed the path of the ball - and the outcome of a dramatic showdown between the last two World Series champions.

Taylor had three hits, including the go-ahead double in the 11th inning, lifting the Los Angeles Dodgers to a 5-3 win over the Braves on Sunday night.

Taylor's double off Darren O'Day (1-2) glanced off Riley's glove as Cody Bellinger scored from third base.

"When I hit it, I knew it was going to hook foul," Taylor said. "I'm just glad he didn't catch it. Then I realized he kind of hit it into fair territory."

Trea Turner padded the lead with a run-scoring single to center field.

The Dodgers, who scored two runs in the ninth to force extra innings, won two of three games in the weekend series that featured Freddie Freeman's emotional return to Atlanta.

Freeman' capped the series on a high note, with his double down the right-field line to lead off the 10th giving the Dodgers a 3-2 lead. With Turner opening the 10th on second base, Freeman's double off Will Smith drove in the go-ahead run. It was the second hit of the game for Freeman, who also had two strikeouts.

The Dodgers won the season series 4-2 and the teams won't play again - unless they meet again in the postseason after playing in the last two NL championship series.

"I don't think I'll have one cheer if I come back in October," Freeman said.

Brusdar Graterol pitched a scoreless 11th for his first career save.

Atlanta's Kenley Jansen and the Dodgers' Craig Kimbrel (1-3) each had blown saves against their former teams. Jansen gave up two runs in the ninth to blow a 2-0 lead, and Kimbrel yielded Matt Olson's tying single to lead off the 10th.

"That's a closer's life," said Braves manager Brian Snitker, who added Jansen "will bounce back. He'll be fine. That's not the first and probably won't be the last time that's happened to him."

Olson's single to right field drove in Travis d'Arnaud, who opened the inning on second base.

Trayce Thompson's two-run single off Jansen in the ninth pushed the game to extras.

"That was quite the game, quite the series," Dodgers manager Dave Roberts said. "That was a heavyweight battle."

Jansen recorded two strikeouts, leaving him one out away from his second save in as many nights. He gave up singles to Gavin Lux and Taylor before Thompson's two-run single to right field carried just over the reach of Braves first baseman Olson.

The hard-throwing Strider recorded seven strikeouts with no walks in the longest start of his rookie season.

Gonsolin, denied in his bid to become the majors' first 10-game winner, gave up one run and five hits in 5 2/3 innings.

Freeman received ovations throughout the series, including as he approached the plate in the first inning. Freeman stepped out of the batter's box, raised his helmet and bat in response to the fans, and the cheers grew. He shook his head as if in disbelief and then finally stepped back into the box before hitting a groundout.

"I just want to say thanks again," Freeman said after the game. "It surpassed all my expectations."

Braves rookie Michael Harris II made a diving catch of Turner's sinking liner in center field to end the ninth. He made another improbable catch in the 11th, running down a drive hit by Lux toward right field.

"The Harris kid in center field, he's a game-changer out there," Roberts said.

Dodgers: RF Zach McKinstry (neck stiffness) was removed from the original starting lineup. Thompson moved into the lineup ... LHP Caleb Ferguson (left forearm tendinitis) threw two simulated innings before batting practice. Roberts said Ferguson is expected to throw again Wednesday. ... Roberts said OF Mookie Betts (right rib fracture) was given permission to leave the team and attend a wedding and won't rejoin the team for its next three games at Colorado. Betts, who was placed on the injured list on June 19, hasn't been cleared for baseball activity.

Braves: Ronald Acuna Jr. was unable to put pressure on his left foot after fouling a ball off his foot in Saturday night's game. Tests revealed no fracture and Snitker said the injury was only a bruise. ... Snitker said LHP Tyler Matzek (left shoulder inflammation) "is going to need a few games, I think" in his minor league rehabilitation at low Class A Augusta, which begins this week.