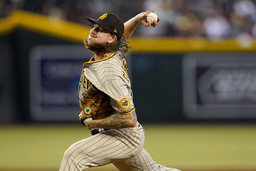 Jake Cronenworth broke out of a 0-for-26 skid with two doubles and a single, driving in two runs and scoring once.

Clevinger (2-0) struck out six and walked one.

It was the second time in less than a week that Clevinger faced the Diamondbacks, again baffling them with his unorthodox delivery. In his previous outing, he went four innings and allowed one run and four hits.

Asked if it was harder to face a team in back-to back starts, Clevinger said, "I'd venture that it's the opposite."

"If you go about it the right way, it's an advantage. You get to see the holes in their swings, you get to see how you attacked them the first time, and then readjust and get to see them right then and there," he said.

"Sometimes throughout the seasons hitters' tendencies will change from week to week. When you're seeing them this close together, I can know what they're trying to do against me and change my attack plan a bit," he said.

Clevinger, who has been coming back from Tommy John surgery, had been working with limited pitch and inning counts prior to this game.

This was the first time since returning June 5 that he went past the fifth inning.

"He's got a couple of consecutive starts under his belt, it's just pitching for him now. Six innings, 90 pitches was what we were looking for from him today, and he did exactly that. Now we just treat him like another pitcher," he said.

Nick Martinez threw three innings in relief to complete the shutout. He gave up two hits and got his second save.

Bumgarner (3-8) allowed one run and four hits in five innings.

C.J. Abrams hit an RBI single in the sixth against reliever Kyle Nelson, a run helped by two walks and an errant pickoff throw.

Cronenworth said he was not too worried about his slump prior to this game.

"I knew I was going to do it" he said. "I was still having good at-bats, getting on base, just like previously, making hard outs. I was hoping they'd fall at some point and they did today"

The Diamondbacks had a chance to get back in the game in the eighth when they had runners on second and third with two out, but rookie Alek Thomas grounded out.

"Things were set up nicely. But he made pitches and we didn't we didn't get the results," Arizona manager Torey Lovullo said.

Padres: 3B Manny Machado (sprained left ankle) ran the bases prior to the game for the second day in a row, giving the trainer a thumbs-up afterwards. Machado has not played since injuring the ankle on June 19, but has avoided his first IL stint since 2014.

Diamondbacks: RHP Zach Davies (right shoulder inflammation) said there was no timetable yet for when he might resume throwing and that it's likely there would be more imaging prior to beginning a throwing program.

Arizona will have an off day before facing the Rockies at Coors Field on Friday. RHP Merrill Kelly (6-5, 3.64 ERA) gets the start for the D-backs.

San Diego heads to Los Angeles to play the Dodgers on Thursday. RHP Joe Musgrove (8-1, 2.12 ERA) starts for the Padres.