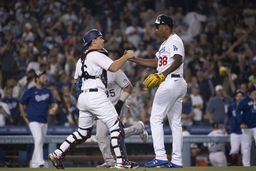 LOS ANGELES (AP) Feeling inconsistent at the plate, Trayce Thompson looks no farther than the next locker down for advice.

"Swinging at too many balls," Thompson said Kershaw told him. "I knew that, but it's good to hear that, especially from him. If you want an honest assessment, ask 22."

Thompson hit a go-ahead, three-run homer in the fifth inning, when the Dodgers finally broke though against Kyle Freeland, and Los Angeles beat the Colorado Rockies 5-3 on Monday night.

"He's come on immediately and made an impact," Dodgers manager Dave Roberts said of Thompson, acquired two weeks ago from Detroit. "Trayce was here to hit left-handed pitching and play good defense and that's what he's done."

Julio Urias (7-6) won his fourth consecutive start, allowing one run and five hits in six innings. The left-hander struck out seven and walked one to beat the Rockies at Dodger Stadium for the first time.

"Another case for him to be an All-Star," Roberts said.

The Rockies scored twice in the ninth and had runners at the corners before falling short.

Reyes Moronta gave up a leadoff homer to C.J. Cron, who was hitless in his first three at-bats with two strikeouts. After two flyouts, Jose Iglesias singled off the glove of third baseman Hanser Alberto, and Elias Diaz walked. Yency Almonte came in to face pinch-hitter Charlie Blackmon, who drove in Iglesias with a single. But then Almonte struck out Connor Joe swinging for his second career save. The other one came in 2020 with Colorado.

Los Angeles closer Craig Kimbrel is still sore after taking a line drive off his back. He'll get the next couple of days off.

Mookie Betts had an RBI single with two outs in the fifth to give the Dodgers a 4-1 lead on their way to an eighth straight victory on the Fourth of July.

Freeland (4-6) kept the Dodgers off the bases until the fifth. With one out, Justin Turner singled to get the offense going. He finished 3 for 4. Chris Taylor followed with a walk that set up Thompson, the younger brother of Golden State Warriors star Klay Thompson.

"Those first four innings everything was working, entire arsenal was going," Freeland said. "We did a really good job of moving the ball inside and out, making them uncomfortable in the box. That fifth inning, made one mistake."

Thompson's shot landed in the lower left-field seats, putting the Dodgers ahead 3-1. Cody Bellinger hit a ground-rule double to deep right and scored on Betts' single.

It was Thompson's first homer at Dodger Stadium in six years.

"I remember it like it was yesterday," Thompson said. "A day game against the Rockies. Six years has gone by really fast."

The Dodgers extended their lead to 5-1 in the seventh. Bellinger drew a leadoff walk from Jhoulys Chacin, who struck out the next two batters. Trea Turner doubled to score Bellinger.

Freeland gave up four runs and six hits in 5 2/3 innings. The left-hander struck out five and walked one six days after beating the Dodgers 7-4 in his previous start.

Colorado led 1-0 on Iglesias' homer leading off the fifth. He hit his first homer of the season last week against the Dodgers, ending a streak of 262 homerless at-bats dating to last September.

Dodgers: After starting at second base, Betts returns to his usual spot in right field on Tuesday. ... LF Chris Taylor came out of the game in the fifth with a swollen left ankle. He'll have a CT scan on his foot, where the pain is originating, and be out a couple of days.