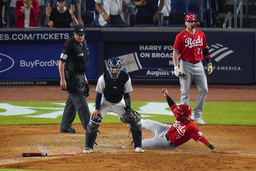 The Yankees were 49-0 when leading after eight innings and the Reds were 0-48 when trailing after eight before New York closer Clay Holmes (4-1) failed to retire any of the five hitters he faced. Holmes loaded the bases by plunking Tyler Stephenson and allowed an RBI single to Tyler Naquin and heard boos after hitting Kyle Farmer with a pitch.

"I think this is just an outlier," manager Aaron Boone said of Holmes, whose ERA climbed from 0.46 to 1.37. "We certainly pay attention to it, but I don't think it was anything more than him being of whack tonight."

It was the most runs Holmes allowed in a game since joining the Yankees. He had allowed two earned runs in his first 38 games.

"It can't happen," Holmes said. "I have to be a little better at making some in-game adjustments."

Wandy Peralta got two outs and was one strike away when India lined a single into center field to score Farmer and Donovan Solano.

"To get down 0-2 right there in that situation, it takes a big at-bat to win the game and he came through," Reds manager David Bell said. "He wants to be the guy in those situations."

Aaron Judge struck out as a pinch-hitter in the ninth against Alexis Diaz, brother of Mets closer Edwin Diaz. The Reds reliever got a double play from Gleyber Torres to finish his third career save.

"It's really emotional, especially the kind of ninth inning that we had today," Diaz said through a translator.

The Reds won their season-high fifth straight game and pulled off their fifth win in the ninth inning since July 3. Cincinnati also overcame a three-run deficit in the eighth inning or later for the second time in three games.

Reiver Sanmartin (2-4) pitched a scoreless eighth to put the Reds in position for the comeback.

The Reds did little against Gerrit Cole, who allowed four hits and struck out 11 in seven innings.

The Yankees have lost three straight for the second time this year after blowing a pair of leads in their four-game series at Boston.

"For this season, it definitely feels a little unusual," New York third baseman Josh Donaldson said. "I think that's a good thing. Just tells you how well that we have played."

Following a nearly 60-minute delay where it never rained and the tarp never covered the field, Cole became the ninth active pitcher to reach 1,800 strikeouts when he whiffed Tommy Pham to end the third with two on.

Cole ended his night by getting strikeouts during lengthy at-bats to Farmer and Mike Moustakas. Cole fanned Farmer on a 98.8 mph, full-count fastball that the shortstop thought was ball four and reached 100.5 mph when he struck out Moustakas.

It was Cole's 52nd career double-digit strikeout game and fifth this year. His 113 pitches were one shy of his season-high set in the first game of a doubleheader May 8 against Texas.

Michael King tossed a scoreless eighth before Holmes blew his third save opportunity.

Anthony Rizzo hit a two-run single in the first and Josh Donaldson added an RBI single in the third as the Yankees went ahead early against Cincinnati rookie Graham Ashcraft.

The Yankees lost Aaron Hicks to right shin contusion, although X-rays were negative. Hicks fouled a ball off his lower right leg in the third and was helped off the field by a trainer.

Votto returned after missing seven straight games due to lower back tightness and was 1 for 4. He grounded out in his first at-bat, struck out in the fourth, popped up in the sixth before ending a 0-for-17 skid with a single in the ninth.

The Yankees are holding their 13th annual HOPE Week, an event when every player participates in events honoring people and groups who serve their communities. Blue Chips, a NYPD co-ed youth mentoring and sports program, was honored Tuesday, and Nestor Cortes was among the players to visit the organization at the NYPD Police Academy in College Point, Queens, a few miles northeast of Citi Field.

On Monday's day off, 16-year-old Landis Sims, who was born without hands and lower legs, was honored. Sims took batting practice along with other baseball players from the Challenge Athletes Foundation and threw out the ceremonial first pitch. The Yankees are 39-16 during HOPE Week, which began in 2009.

Reds: RHP Tyler Mahle (strained right shoulder) threw in Cincinnati. Manager David Bell said Mahle is on target to start one of the first three games following the All-Star Break. ... OF Albert Almora Jr. was placed on the injured list for an unspecified reason. ... OF Stuart Fairchild was recalled from Triple-A Louisville.