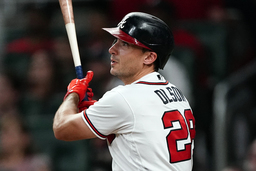 ATLANTA (AP) Before another sellout at Truist Park, Matt Olson delivered another big blow for the Atlanta Braves.

"Obviously a big crowd here tonight, which is cool on a Tuesday night, showing up for a big division matchup," Olson said. "It was cool. I was pretty fired up."

Olson hit a go-ahead, two-run homer in the sixth inning, Adam Duvall went deep for two runs in the seventh and the Atlanta Braves beat the New York Mets 4-1.

The defending World Series champion Braves trimmed the Mets' NL East lead to 1 1/2 games, and the teams will play the rubber match of the three-game series Wednesday. The Braves haven't lost consecutive games since June 17-18. They are 30-9 since June 1, best in the major leagues over that span.

Atlanta had one hit against Mets starter David Peterson before Olson crushed a slider 426 feet to straightaway center field, the 14th time he's gone deep this year. Peterson had retired 14 of 15 batters before he walked Dansby Swanson with one out in the sixth. Olson, the next batter, made it 2-1.

"Looking back on it, I don't feel like I've been locked in or that everything has totally clicked for me yet, so with that being said, I'm happy to have something to show for it," said Olson, who leads the majors with 33 doubles and began the day tied for fourth with 46 extra-base hits. "There's definitely some room for improvement, but we're winning games and that's the name of the game."

Duvall connected off Seth Lugo with a 412-foot shot to the second level of seats in left field, putting Atlanta up 4-1 after Travis d'Arnaud singled. It was Duvall's 11th homer.

Peterson (5-2) allowed two hits and two runs with three walks and nine strikeouts in 5 1/3 innings. He remained tough on the road, lowering his ERA away from New York to 2.84 - a major improvement from the 7.97 road ERA he posted last year.

"I don't want to give up the lead there," Peterson said. "I want to keep us in the ballgame and keep the lead. After the walk, I wanted to get Olson and go after (Austin) Riley and get out of the inning."

Tyler Matzek (1-2) faced the minimum in 1 1/3 innings to earn the win on his bobblehead night. Collin McHugh pitched a clean seventh and faced four batters in the eighth before A.J. Minter earned his fourth save with a perfect ninth.

Braves starter Spencer Strider wasn't as dominant as he was in his last two outings, when he struck out 23 in 12 innings, but the rookie still had plenty of velocity and movement on his pitches to keep the Mets on their heels. The right-hander gave up five hits and one run with three walks and eight strikeouts.

"He wasn't flowing great," Atlanta manager Brian Snitker said. "(The Mets) are an experienced team of hitters. They're not going to bite."

Strider, who threw 103 pitches in 4 2/3 innings, worked out of a jam with two runners in scoring position to end the fourth, getting Travis Jankowski to ground out, but he was less fortunate in the fifth. Brandon Nimmo walked, advanced on a wild pitch and scored when Francisco Lindor's triple bounced past right fielder Ronald Acuna Jr. to give the Mets a 1-0 lead.

The Braves improved to 22-8 against left-handed starters, best in the NL. They lead the NL with 136 homers and rank second in runs with 421.

"This is one of the deeper (lineups) as far as one through nine," Olson said. "Not counting on one guy to come up every night in order to win. Everybody's taking their turns and that's part of a good team. It was a big win tonight."

Nimmo made a tough catch in center field, sprinting back and jumping against the wall to pull in Swanson's long drive for the second out of the third.

Orlando Arcia got the start at 2B with Atlanta facing a lefty. Snitker said Robinson Cano will platoon at second with Arcia, with Cano starting against righties. Cano made his Atlanta debut Monday with two hits. Arcia went 0 for 3 on Tuesday.