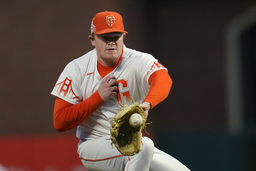 "It was an excellent day," Estrada said through an interpreter. "We were able to put the ball in play, we were able to execute and we came out with a win. We were very aggressive and we were able to back up the great job that Webb did."

Both teams used position players to pitch late in the blowout.

Giants outfielder Luis Gonzalez pitched the ninth and allowed two singles. It's the fourth time this season that manager Gabe Kapler has used Gonzalez in relief.

Diamondbacks catcher Carson Kelly made his second appearance of the season on the mound and allowed three runs and three hits in one inning.

Webb (8-4) pitched around traffic in nearly every inning and had two walks in beating Arizona for the third time in four starts. Webb allowed five hits and ended his night on a comebacker by Carson Kelly to end the sixth with two on.

"I don't think I had probably my best stuff, but we knew going in that this team doesn't chase at all," Webb said. "I think they have the lowest chase rate in baseball, so if you don't have the best stuff, just try to attack the zone and see what happens."

Estrada hit his eighth home run leading off the third against Keuchel, then crushed a two-run shot off Caleb Smith in the seventh, helping the Giants end a five-game losing streak at Oracle Park. It's the second multi-home run game of Estrada's career.

Bart homered with one out in the second. Three batters later, Mercedes added his first of the season, a two-run drive to center. Mercedes also had an RBI double in the first and a RBI groundout in the eighth.

It's the fifth time this season that the Giants have hit four or more home runs, and first since June 25.

"I thought it was a real group effort," Kapler said. "We had good at-bats from start to finish."

A year ago, San Francisco led the National League with a franchise-record 241 home runs. Kapler's team entered Tuesday with 99.

Leading 1-0, the Giants benefited from a misplayed ball by right fielder Jake McCarthy and scored four runs in the first.

McCarthy started back on David Villar's high fly, appeared to lose the ball in the sun, then stumbled going forward and the ball got past him. Mercedes and Darin Ruf scored. Villar, who slid head-first into third, got up and scrambled home on an overthrow by second baseman Sergio Alcantara.

"I got a decent read on it, was playing the sun a little but stepped back, foot slipped," McCarthy said. "Ball should be caught. A ball dropped that shouldn't drop ever, so that's just on me."

Alcantara had two hits for Arizona.

Kapler made a mound visit in the ninth inning after Gonzalez had a pair of fastballs clocked in the mid-80s. "I just didn't love that he was throwing it hard, especially a guy who's coming off the IL," Kapler said. "I think he got caught up in the moment. He's got a great arm so it's not surprising to see him throw 85-90 mph, but I don't think that's what we really want from him."

Webb got a chuckle out of the whole thing.

"That was actually funny that Kap had to go out there and tell him to stop throwing it so hard," Webb said.

Bart's home run was his first since May 15, when he took Albert Pujols deep. . Austin Slater also had three hits for San Francisco. . Alcantara is 6 for 12 with three RBIs in six games since returning to the Diamondbacks. . Giants pitcher Carlos Rodon was added to the NL All-Star team, replacing Milwaukee's Josh Hader.

Diamondbacks RHP Zac Gallen (4-2, 3.62 ERA) pitches the series finale Wednesday afternoon and is winless in four previous starts against San Francisco. The Giants have not announced a starter.