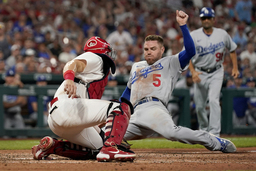 Anderson (10-1) scattered three hits, struck out four and walked two while needing just 88 pitches to get through six innings. It was the first career victory against St. Louis for Anderson, who entered 0-2 with a 7.90 ERA in three previous starts, all as a member of the Colorado Rockies.

"He did a really good job," Dodgers catcher Will Smith said of Anderson. "He's mixing really well with his pitches. Also, you know, his timing, his delivery. He just executed pitches."

It was Anderson's first appearance against the Cardinals since 2018. He said those previous numbers were a bit skewed.

"It's a different lineup over there, too," Anderson said. "It's just one of those things that, you know no matter what it is, you've got to out there, throw strikes, you know, execute your game plan."

Yency Almonte, Evan Phillips and Craig Kimbrel each pitched an inning of scoreless relief to finish the combined five-hitter.

The Dodgers won for the 13th time in their last 15 games. They improved to 9 1/2 games ahead of San Diego for first place in the National League West after being tied with the Padres on June 22.

Freddie Freeman singled in the first and doubled in the fourth to continue his torrid hitting streak. He has 14 hits in his last 17 at-bats and has reached base 17 times in his last 20 plate appearances.

"It just feels like I'm recognizing strikes and I'm hitting the strikes," Freeman said. "I'm not fouling really any pitches off. When I swing, I hit it, and I'm swinging at good pitches right now."

Dodgers manager Dave Roberts said Freeman is as good a player that hasn't made the All-Star Game that he can imagine.

"Just the ball looks like a melon up there (for him)," Roberts said. "He's just seeing it so well, really, left-handed or right-handed. He's taken some tough pitches and it seems like everything he swings at is center cut."

Justin Turner singled home Freeman to break a scoreless tie in the fourth and Smith's two-out double scored Trea Turner to make it 2-0 in the sixth. It was the first time in five games the Dodgers scored first.

Lux drove a 90.4 mph sinker 402 feet over the right field wall in the seventh. It was his fourth home run of the season and chased Cardinals starter Dakota Hudson from the game.

St. Louis has lost eight of its last 12 games.

"He did do a nice job, the combination of the four-seam and the slider played," Cardinals manager Oliver Marmol said. "We're seeing him use it a little different, that slider has a little bit more depth to it, he's getting outs with it, which allows that four-seam to play a little better. So, battled through a little bit of inconsistent command, but still gave us a shot there."

Dylan Carlson had a pair of hits and reached three times for the Cardinals.

The Cardinals activated OF Tyler O'Neill, who had missed 23 games due to a left hamstring strain and a right hand injury, and optioned OF Lars Nootbaar to Triple-A Memphis. O'Neill batted sixth and went 0 for 4.

Dodgers: Placed RHP Brusdar Graterol (right shoulder inflammation) on the 15-day injured list retroactive to July 11 and recalled RHP Reyes Moronta from Triple-A Oklahoma City. Graterol, who will undergo an MRI when the team returns to Los Angeles on Friday, said he felt pressure in his throwing shoulder while throwing before Wednesday's game.

Cardinals: INF Brendan Donovan (illness) returned to the lineup and batted eighth, going 0 for 2 with a walk, after being held out of the starting lineup the past five games. He did pinch hit in Wednesday's game.

Cardinals: RHP Andre Pallante (2-4, 3.18 ERA) starts the first of a three-game series against Cincinnati, who counters with RHP Hunter Greene (3-1, 5.70 ERA), on Friday night. Pallante is 1-0 with a 0.00 ERA in two appearances against the Reds this season.