Ruiz gets 3 hits, Nats avoid sweep with 4-3 win over D-backs 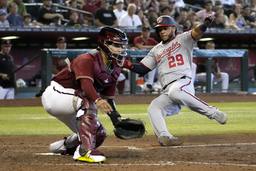 PHOENIX (AP) The hapless Washington Nationals made three errors in the field, a mental mistake on defense and a few baserunning miscues that nixed some great scoring opportunities.

Wins haven't come easy for the Nationals this season, so they'll certainly take the 4-3 victory over the Arizona Diamondbacks on Sunday. It was just their third win in the past 20 games.

"It hasn't been going our way lately," reliever Kyle Finnegan said. "To get a win like that, where we fight until the last out, great game by both sides, that's what it's about."

Keibert Ruiz had three hits, including a go-ahead single in the eighth inning, as Washington avoided a three-game sweep.

The Nationals were sloppy in the field with their three errors and a couple other questionable decisions. Despite those problems, they stayed close and tied the game 3-all on Josh Bell's RBI double in the seventh.

Washington kept hitting in the eighth. Pinch-hitter Lane Thomas led off the inning with a double against All-Star left-hander Joe Mantiply (1-3), and Ruiz brought him home with a line-drive single to right field for a 4-3 advantage.

Washington's bullpen got out of a bases-loaded, no-outs jam in the eighth. Steve Cishek got Ketel Marte to pop up for the first out and then Finnegan coaxed a double-play grounder from Christian Walker to end the inning.

Arizona left 13 runners on base.

"We couldn't get a big hit when we needed, or make a big pitch, or do the right things at the right time to create some space as far as the score goes," manager Torey Lovullo said. "I felt like we did a lot right in this game with the exception of score runs."

Finnegan also worked a scoreless ninth for his second save.

Corbin Martin threw four innings for the Diamondbacks in his first start of the season. The right-hander gave up just one run despite allowing five walks and four hits.

Erick Fedde pitched 4 2/3 innings for the Nationals, giving up three runs on seven hits and four walks. He struck out three.

Carl Edwards Jr. (3-3) got the win with a scoreless inning of relief.

Washington's Victor Robles was spotted by cameras in the Nationals dugout wearing a red clown nose one day after D-backs pitcher Madison Bumgarner called Robles a "clown" for briefly admiring the homer he hit Saturday.

Robles hit a solo shot in the eighth, pulling the Nats within 7-2, and watched it for a moment before rounding the bases.

"It's 7-1, you hit your third homer of the year and you act like Barry Bonds breaking a record," Bumgarner said. "Clean it up."

Chase Field's retractable roof was closed for Sunday's game but the stadium's back panels were open to the elements, which is rare for a July afternoon game in the desert.

Luckily for everyone involved, it was a relatively cool day. The temperature at game time was 89 degrees and cloud cover kept the temperature in the low 90s for most of the game.

The D-backs released a statement on the issue: "Unfortunately, four of the large door panels are not functioning properly and must remain open for today's game. As a result, we began cooling the building earlier than usual. We believe this will mitigate any issues of discomfort for our fans and players, with full focus as usual on experience."

Diamondbacks: Martin was promoted from Triple-A Reno, and RHP Edwin Uceta was sent to Reno to make room on the roster.

Nationals: Travel to Los Angeles for a three-game series against the Dodgers starting Monday. The Nats will start RHP Paolo Espino (0-3, 3.57 ERA) while the Dodgers will throw All-Star RHP Tony Gonsolin (11-0, 2.02)