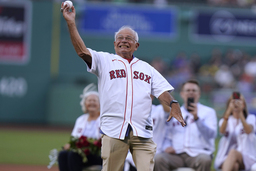 BOSTON (AP) Xander Bogaerts was listening when the Red Sox brass said they weren't shopping him around at the trade deadline.

"I think I started playing better after that, right?" he said after hitting a three-run homer to lead Boston to a 4-2 victory over the Cleveland Guardians on Thursday night.

"It has been (tough)" dealing with trade rumors, said Bogaerts, a four-time All-Star who is eligible to opt out of his contract and become a free agent in the offseason. "But I mean, we're professionals in the end. You sign up for this. You've got to deal with it."

Kutter Crawford scattered three hits over 5 2/3 innings, and Alex Verdugo had a pair of hits to help the Red Sox win for just the fifth time in 20 games. The slump has led to talk that the team will sell off its best players before Tuesday's trade deadline, including Bogaerts and third baseman Rafael Devers.

But Red Sox Chief Baseball Officer Chaim Bloom told reporters on Wednesday that there were no plans to do so. Bogaerts said he also received a similar message in person.

"It can be really tough - some days more than others," Bogaerts said. "But get this thing over with and keep rolling."

Guardians starter Triston McKenzie, who had allowed one run total in four previous July starts, took a one-hit shutout into the sixth before putting two on with one out for Bogaerts. The Red Sox shortstop hit an 0-2 slider out to center field to turn a one-run deficit into a 3-1 lead.

"That was a huge win for us," said manager Alex Cora, whose team hadn't hit a three-run homer since July 7. "We haven't had one of those in a while and we're able to breathe."

Boston scored another off McKenzie, who hadn't allowed an extra-base hit all month, when Franchy Cordero led off the seventh with a double and scored on Bobby Dalbec's hard line drive off the Green Monster.

In all, McKenzie (7-7) allowed six hits and walked one in seven innings in his first loss since June 27. He was 3-0 with a sparkling 0.34 ERA over his previous four starts.

Jake Diekman (2-0) got the win, retiring each of his four batters. Garrett Whitlock pitched two innings for his third save.

Crawford's only mistake was a solo homer by Jose Ramirez in the fourth that sailed high over the top of the Pesky Pole.

The ball curved far to the right of the foul pole and Cora challenged whether it was fair, but replays gave no evidence that could say either way.

CAN YOU BELIEVE IT?

The Red Sox honored broadcaster Joe Castiglione before the game for his 40 years on the air with the team. A surprise guest was Roger Clemens, who was a rookie in 1984, the year after Castiglione debuted on the team's radio call.

Clemens brought out a replica of the new plaque that marks the "Joe Castiglione Booth" in the Fenway press box.

Castiglione called Clemens' record-setting 20-strikeout game against Seattle in 1986 and the game where he matched the record 10 years later against Detroit. The Connecticut native was also on the mic, exclaiming "Can you believe it?" when the Red Sox won the 2004 World Series to end an 86-year drought.

Before Thursday's game, he said it again: "Forty years. Can you believe it?"

Guardians: OF Oscar Gonzalez rested after going 1 for 5 in two minor league rehab appearances as he tries to come back from an abdominal strain. He will make another start for Double-A Akron on Friday.

Red Sox: 2B Trevor Story rested Thursday after feeling pain when he swung a bat on Wednesday for the first time since he went on the IL after being hit by a pitch on the right wrist.