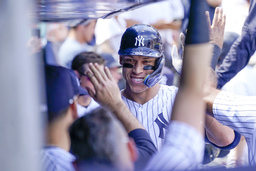 Judge, who gave his first home run ball to his parents, was able to get his 200th from a "good family" without a big negotiation. He believes this one will go to his parents, as well.

DJ LeMahieu homered and had an RBI single, and Matt Carpenter homered for the 15th time in 40 games for New York, which won its third straight after dropping a pair of games to the New York Mets.

The American League-leading Yankees have won seven straight against the Royals and 10 of the last 11.

Whit Merrifield had a third-inning double for his 1,000th career hit and Salvador Perez had a sacrifice fly for the Royals, who have lost five straight.

A day after becoming the first player with 40 home runs this season, Judge fouled off two breaking balls from starter Jonathan Heasley before sending a 2-2 fastball into the right-center field seats for a two-run drive in the second inning. It was one of his two hits, and he also walked twice.

"He smoked it," New York manager Aaron Boone said. "I told him the right fielder would have been moving in if I hit that same ball."

"I feel like the big numbers, it's always tough to get past those," Judge said. "To get that out of the way, plus a win, is pretty sweet."

Judge has 42 homers this season and is on pace for 67. He is tied with Sammy Sosa and two behind Barry Bonds and Mark McGwire for the most before Aug. 1 in MLB history. Bonds holds the season record with 73 homers in 2001.

A free agent at the end of the season, Judge has nine homers and 21 RBIs with a .436 batting average in 10 games since the All-Star break. After hitting just one homer in his first 13 games, Judge has connected for 36 over his last 79 games and is on pace to surpass Roger Maris' club record of 61, set in 1961.

"I can't imagine a person more equipped to go through something like that," Boone said of Judge. "I know, at his core, what he's about and that's this team and us winning and nothing will get in the way of that."

Yankees All-Star Nestor Cortes (9-3) allowed two runs in five innings. He struck out five and walked two and turned in a nifty fielding play in the second, nabbing Hunter Dozier at third after slipping to the ground while fielding MJ Melendez's grounder. Cortes has a 2.60 ERA over five July starts.

"Had a little bit of traffic throughout the game that he was able to navigate, but overall, I thought he threw the ball well," Boone said.

Heasley (1-6), who was reinstated from the injured list prior to the game after missing 17 games with right shoulder tendonitis, allowed six runs over 3 1/3 innings in his first start since July 9.

"You make mistakes against good teams, they're going to make you pay," Kansas City manager Mike Matheny said. "They made us pay."

Aroldis Chapman threw a scoreless inning and Clarke Schmidt worked the final three for his second career save.

Garcia singled in the fourth to drive in Kansas City's second run for his first career RBI.

Prior to the game, New York held its annual Old-Timers' Day ceremony for the first time since 2019, although the traditional playful exhibition game was not held.

Royals: RHP Zack Greinke, originally scheduled to pitch Saturday, was given an extra day of rest and will now pitch Sunday. ... SS Bobby Witt Jr. returned to the lineup after missing five games with right hamstring soreness. ... RHP Jackson Kowar was optioned to Triple-A Omaha to make room for Heasley. ... Perez (left thumb) started behind the plate for the first time since June 21, after undergoing surgery to repair a torn ligament.

Yankees: OF Giancarlo Stanton (left Achilles tendonitis) has yet to resume baseball activities. ... 1B Anthony Rizzo (rest) was given the day off.

Greinke (3-6, 3.44 ERA) takes to the mound for Kansas City in the series finale. A potential trade candidate, Greinke is winless in six career starts (seven appearances) at Yankee Stadium, holding an 0-3 record with a 9.22 ERA. He'll be opposed by LHP Jordan Montgomery (3-3, 3.50 ERA).