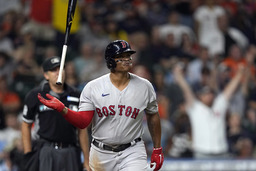 HOUSTON (AP) Boston Red Sox manager Alex Cora is feeling good about his team with Rafael Devers healthy and back in the lineup and the recent additions of Eric Hosmer and Tommy Pham.

Devers homered with two RBIs in his return from the injured list to lead the Red Sox to a 2-1 win over the Houston Astros Tuesday night, hours after they acquired Hosmer in a trade with San Diego.

The victory improved Boston to 53-52 and leaves the team two games back for the third Wild Card playoff spot.

"We trust the team," Cora said. "We trust this group. Been there, done that. And now we've just got to play good baseball for two and a half months."

Devers didn't show any signs of rust in his return after sitting out since July 23 with inflammation in his right hamstring. He hit an RBI double in the fourth inning before hitting a tiebreaking solo homer with two outs in the sixth inning to help Boston to its third straight victory.

"It's very important to come to Houston and beat this team, which is one of the best teams in the league and give that... raised our confidence on a level that we need," Devers said in Spanish through a translator. "And that's very good for us."

Pham singled and scored on the double by Devers in his debut with the Red Sox after a trade from Cincinnati Monday.

"To have those guys in the lineup now we do believe we're better," Cora said.

The trade for Hosmer comes a day after they sent catcher Christian Vazquez to the Astros, a move that had some players worried the team was giving up on the season.

Hosmer was part of the deal with Washington for Juan Soto before he refused the trade and the Padres instead shipped him to Boston along with two minor leaguers and cash in exchange for minor league left-hander Jay Groome.

Davis struck out Kyle Tucker before he was replaced by Tanner Houck. He retired Aledmys Diaz and Jeremy Pena to end the threat.

Trey Mancini, traded from Baltimore Monday, made his Astros debut as a pinch-hitter to start the ninth and grounded out. Vazquez made his first appearance for Houston next when he pinch hit, and he also grounded out.

Houck then retired Jose Altuve on a long fly ball to center field to get his eighth save.

Manager Dusty Baker sent Vazquez out with the lineup card before the game and he tipped his cap to his teammates in the visitor's dugout.

"Javier was good," Baker said. "He had good command of his fastball. It was just too much Devers. We were throwing him last year tons of fastballs and he caught up to some tonight."

Javier didn't allow a hit until Pham singled with one out in the fourth. Devers then doubled on a liner to right field to score Pham and tie it at 1-all.

There were two outs in the sixth when Devers connected on his shot to right field to make it 2-1.

Jose Altuve hit a leadoff double and scored on a single by Yuli Gurriel to give Houston a 1-0 lead.

A day after trading for Vazquez and Mancini, the Astros bolstered their bullpen Tuesday by acquiring left-hander Will Smith from Atlanta for starter Jake Odorizzi. Smith arrived in the Astros dugout early in the game and greeted several of his new teammates before moving to the dugout where he exchanged hugs and handshakes with his fellow relievers.

Red Sox: OF Rob Refsnyder was placed on the injured list with a sprained right knee. ... C Ronaldo Hernandez and OF/1B Franchy Cordero were optioned to Triple-A Worcester.

Astros: General manager James Click said Tuesday that C Jason Castro had knee surgery last week and would miss the remainder of the season. ... RHP Lance McCullers, who has been out all season with a strained right forearm, allowed three hits and three runs - two earned - in 3 1/3 innings in his third rehabilitation start for Triple-A Sugar Land. He threw 76 pitches.

Bregman returned to the lineup after spending just one day on the paternity list to be with his wife Reagan for the birth of their first child, a son named Knox Samuel Bregman.