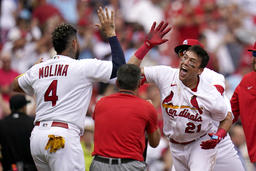 ST. LOUIS (AP) Lars Nootbaar hit a tying sacrifice fly in the seventh inning and a game-ending RBI single in the ninth, sending the St. Louis Cardinals to a 4-3 victory over the Chicago Cubs on Thursday in the opener of a split doubleheader.

St. Louis trailed 3-0 before rallying in the seventh against Marcus Stroman. Nolan Gorman and Paul Goldschmidt hit back-to-back homers before Nolan Arenado doubled and scored on Nootbaar's flyball to center.

"When it all clicks, we're able to string together some quality at-bats," St. Louis manager Oliver Marmol said. "Those guys there definitely made an adjustment on Stroman and made some really hard contact. Classic third time through the lineup."

Arenado and Paul DeJong walked with one out in the ninth against rookie Erich Uelmen (0-1). Nootbaar then drove in Arenado with a liner to right on a 2-2 pitch.

Nootbaar said he thought Arenado would be able to score the winning run. Arenado's slide beat the tag by catcher Willson Contreras.

"He's not the fleetest afoot. I'd never seen him move that fast before," Nootbaar said with a laugh. "But he's a smart baserunner. I had a pretty good idea he would score there. I made him run a little harder than he needed to. I owe him."

Ryan Helsley (6-1) got three outs for the win, helping the Cardinals pull within a half-game of Milwaukee for the NL Central lead.

Contreras homered for Chicago, which dropped its fourth straight game. Stroman was charged with three runs and five hits in 6 2/3 innings.

"I thought he had command of both sides of the plate. He was sharp," manager David Ross said. "It was a really nice performance today I thought."

The doubleheader was scheduled after Wednesday night's game was postponed by rain. St. Louis improved to 5-2 in its four doubleheaders this season, and Chicago dropped to 1-8 in its five doubleheaders.

Contreras, who was the subject of trade rumors ahead of Tuesday's deadline, hit a solo drive in the first for his 15th homer.

"I just wanted that to be over and clear my mind to play baseball," Contreras said of the deadline. "I need to keep my focus on baseball and I don't have to worry about something else any more. It feel more relaxed. It took a lot of weight off my shoulders."

The Cubs added two more in the sixth against Miles Mikolas. Contreras doubled and scored on Seiya Suzuki's single, and Patrick Wisdom added a sacrifice fly.

Mikolas allowed seven hits, struck out six and waked one in 6 1/3 innings.

Rafael Ortega had three hits for Chicago, and Nico Hoerner went 2 for 4.

Major League Baseball announced that the Cardinals and Cubs will play a two-game series in London in June.

Cubs: LHP Matt Dermody was recalled from Triple-A Iowa to serve as the 27th man for the split doubleheader. Dermody, 32, is 6-3 with a 3.74 ERA in 20 games (13 starts) for Iowa this season. ... INF David Bote was optioned to Iowa to create a roster spot for LHP Sean Newcomb, who was slated to start the second game.

Cardinals: Added RHP James Naile as the 27th player for the doubleheader. Naile relieved Mikolas in the seventh and got two outs.

Cardinals: RHP Drew VerHagen (right hip impingement) will have hip surgery soon. ... LHP Steven Matz (torn left MCL) will not need season-ending surgery and instead will rehab. There is no timetable on when he will be back.

Cardinals: LHP Jose Quintana (3-5, 3.50 ERA) starts the second game of the doubleheader. Quintana was acquired in a trade with Pittsburgh on Monday. On Friday, RHP Dakota Hudson (6-6, 4.10 ERA) will square off against New York Yankees LHP Nestor Cortes (9-3, 2.53 ERA) in the opener of a three-game set.