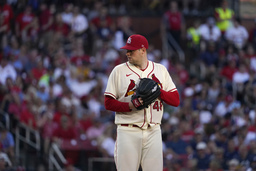 Making his first start for St. Louis since being acquired at the trade deadline earlier in the week, Montgomery (4-3) was taken out after five innings for precautionary reasons due to cramping.

"It's tough to throw against a team you just left. For him to do what he did was pretty special," St. Louis manager Oliver Marmol said. "He had nine groundball outs. A really good job by Jordan."

St. Louis has won a season-high six straight games, and eight of nine. The Cardinals are 10-2 over their last 12 games at Busch Stadium, including seven straight wins.

Montgomery gave up two hits and a walk with one strikeout.

"I was pretty nervous especially with how hot it was," Montgomery said. "The humidity is definitely different from New York. My body started cramping up. I gave the team five innings."

"Seeing him in red was a little different," said Aaron Judge, who singled in the first off Montgomery. "It was a little funky."

Only two runners reached second base.

"We played good baseball and we got rewarded for it," Montgomery said. "It definitely feels good. This team is playing good. I'm glad I could come in and keep it going."

Giovanny Gallegos pitched 1-2-3 ninth inning to earn his 11th save, striking out the final two hitters.

The only run came in the first inning as Paul Goldschmidt doubled with two outs and scored on a single by Arenado.

Domingo German (1-2) took the loss, giving up the run and four hits in five innings.

"For me, I mixed my pitches and I was attacking," German said through a translator. "I wanted to keep it close. It was exciting and I was enjoying the challenge of pitching against (Montgomery)."

It was the seventh shutout loss for the Yankees this season. It was their first 1-0 loss since Sept. 11, 2020.

"We weren't able to get much going," Yankees manager Aaron Boone said. "They made some great plays against us. They've done a good job of keeping us in the ballpark and flashing some leather against us."

The official attendance was 48,581. That is the largest crowd ever in Busch Stadium history, including regular season and postseason games along with the 2009 All-Star game. "This place was absolutely electric tonight," Marmol said.

Nine-time All Star Joe Torre, who was a NL MVP and twice named an AL Manager of the Year, was honored before the game and a bobblehead of him was given away to fans. Torre played for and managed the Cardinals and also managed the Yankees to four World Series titles. A video of his highlights as a Cardinal player and manager and as a Yankee manager was shown on the videoboard. He went into the Hall as a manager.

Goldschmidt hit his second double in the third. The ball hit at the base of the wall and went to center fielder Tim Locastro, who threw to second baseman Gleyber Torres. Torres' relay to catcher Kyle Higashioka beat a sliding Nolan Gorman to prevent a run. ... In the fourth, Josh Donaldson hit a hard grounder to Arenado at third base. Arenado dropped down to one knee to catch it and then threw to first to rob Donaldson of a hit. ... In the eighth, right fielder Lars Nootbaar laid out flat to make a diving catch with his glove on the grass to prevent Higashioka from getting a hit with a runner on first and just one out.

Goldschmidt has committed to play for Team USA along with Arenado when the World Baseball Classic is played in March. Goldschmidt was on the 2017 team and appeared in five games and recorded one hit before being replaced by Eric Hosmer for the semifinal and final games. The Americans went on to capture the gold.

Yankees: 1B Anthony Rizzo (lower back tightness) remained out action Saturday. He was scratched from the starting lineup just before the game began. He missed four games last month with the same issue. Rizzo has 27 homers this year. ... After the game, RHP Ron Marinaccio was sent down to Triple-A Scranton/Wilkes-Barre.

Cardinals: RHP Jack Flaherty (right shoulder strain) said he threw a simulated inning and that he "feels good and is glad to be here" after rehabbing in California. Flaherty, 26, has been limited in availability and effectiveness in 2022. He's thrown a total of eight innings in three starts. He will throw another bullpen session Sunday and then evaluate where he stands.

Yankees: Frankie Montas (4-9, 3.18) will be making his first start for the Yankees. He was acquired from Oakland on Monday. He has never pitched against St. Louis before.