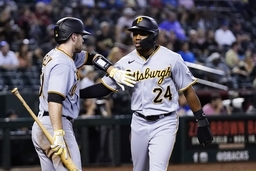 PHOENIX (AP) Rodolfo Castro left his phone in the clubhouse, brought his bat to the field and helped the Pittsburgh Pirates beat the Arizona Diamondbacks 6-4 on Wednesday night.

Castro had two hits one night after an embarrassing smartphone faux pas. The 23-year-old mistakenly left his phone in the back pocket of his baseball pants during Tuesday's game, and it came flying out on a headfirst slide into third base.

It was not the kind of impression the youngster wanted to make: He's split time between the minors and big leagues over the past two years and had just been recalled from Triple-A Indianapolis.

On Wednesday, he made the highlight reel for baseball-related reasons.

"Like we talked about, he made a mistake," Pirates manager Derek Shelton said. "Good at-bats today, played good defense, drove the ball, ran the bases well - so it's nice to see. When we have young kids, they do things.

The sparse crowd at Chase Field didn't give Castro too much grief for the phone gaffe, though a couple of jeers could be heard during his first at-bat. Castro didn't seem to mind, responding with a single. He added a triple in the sixth inning and scored on Greg Allen's double to make it 5-2.

The Pirates jumped out a 2-0 lead in the third when Ben Gamel's double to the right-center gap brought home Jason Delay and Kevin Newman, who finished with three hits.

Pittsburgh pushed its advantage to 3-0 in the fourth on a double steal. Tucupita Marcano was able to dart home from third base while the D-backs defense was distracted with Delay, who was caught in a rundown between first and second.

Pirates starter Mitch Keller (4-8) gave up three runs and five hits in 5 1/3 innings. The right-hander walked one and struck out three.

Colin Holderman, Wil Crowe and Eric Stout combined to give up one run over 3 2/3 innings. Stout got the final out for his first career save, helping the Pirates wiggle out of a bases-loaded, no-out jam in the ninth.

"It was just a little bit of a fistfight all day long," Arizona manager Torey Lovullo said. "I don't think he had his best stuff."

Arizona cut the deficit to 3-2 in the fourth on Ketel Marte's RBI single and Christian Walker's sacrifice fly. Alek Thomas had two hits.

The Pirates improved to 5-4 in August. The Diamondbacks had a three-game winning streak snapped.

The Pirates got out of a ninth-inning, bases-loaded, no-out situation thanks to a strange double play.

Arizona's Carson Kelly hit a hard grounder to third baseman Ke'Bryan Hayes, who fired to Castro for the force out at second. Castro then surprisingly threw back to third to Newman, who got Emmanuel Rivera in a rundown and eventually tagged him out.

Rivera looked as though he could have made it back to second base, but he seemed confused because Sergio Alcantara - who had already been forced out - was still standing on the bag.

A replay review confirmed the Pirates got two outs.

Said Newman: "Thankfully, it worked out."

Pirates: The club hopes All-Star reliever David Bednar (lower back tightness) can begin throwing in the next week.