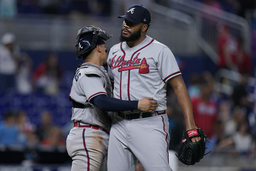 Eddie Rosario singled and doubled, and Matt Olson also went deep for the Braves in the opener of a four-game series against their NL East opponent.

Marlins reliever Elieser Hernandez (2-6) allowed Vaughn Grissom's leadoff double before Harris connected with a shot that bounced off the upper deck railing in right and put Atlanta ahead 4-2.

"I was just seeing the ball good, honestly," Harris said. "They were throwing a good amount of fastballs. When I swung, I tried to put a good swing on them."

The blast from the rookie outfielder was clocked at 111 mph off his bat. Harris has 11 homers since his major league debut May 28.

"You don't feel it off the bat, you know it has to go somewhere," Harris said.

Tyler Matzek (2-2) pitched a scoreless seventh. Jacob Stallings and Peyton Burdick hit consecutive one-out doubles off Kirby Yates that got Miami to 4-3 in the eighth.

A.J. Minter relieved Yates and struck out pinch hitter Garrett Cooper and retired Jon Berti on a pop out to second. Kenley Jensen closed with a scoreless ninth around two walks for his 25th save.

"They kept the game in check and allowed us to win the game, all the bullpen guys," Braves manager Brian Snitker said. "It wasn't easy but they never gave in."

The Marlins had 12 hits but were 1 for 14 with runners in scoring position. It was also their 25th one-run loss.

"We gave ourselves a lot of chances," Miami manager Don Mattingly said. "We just didn't get the runs we needed."

Atlanta tied it at 2-all on Dansby Swanson's sacrifice fly in the sixth. Harris hit a leadoff double against Marlins starter Pablo Lopez and advanced on a groundout.

Braves starter Jake Odorizzi was lifted after four innings and 87 pitches. The right-hander allowed two runs, eight hits, walked one and struck out two. Odorizzi has not completed five innings in his two outings since the Braves acquired him from Houston on Aug. 2.

"I'm not happy with it but tried to keep where it was at," Odorizzi said of his outing. "There are a lot of things I'm not content with tonight."

Olson's 22nd homer in the fourth narrowed a 2-0 deficit.

Brian Anderson gave Miami an early advantage with his blast to lead off the second. Reinstated from the injured list Friday, Anderson drove a cutter from Odorizzi over the wall in left for his fourth homer.

The Braves placed INF Enhire Adrianza on the injured list and recalled OF Guillermo Heredia from Triple-A Gwinnett.

In addition to Anderson, the Marlins reinstated INF Jon Berti from the injured list. OF Billy Hamilton was out-righted to Triple-A Jacksonville while OF Bryan De La Cruz was optioned to the same minor league club.

Braves: :LHP Kyle Muller (0-1, 23.63) will start the opener of a split doubleheader Saturday while RHP Ian Anderson (9-6, 5.11) go in the second game. LHP Jesus Luzardo (3-4, 3.29) is scheduled to start the first game for the Marlins while the second starter has not been announced.