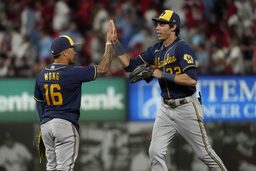 Wainwright took a no-hitter into the seventh inning and ended up finishing nine, allowing one run on three hits with eight strikeouts in his 109-pitch outing.

"I had good stuff," Wainwright said. "A good plan. I really wanted to throw a no-hitter tonight. I really did. I felt like I was going to, you know, from the first inning on. I thought tonight was going to be the night. That's a tough team over there. A bunch of hitters from one through nine that can hit a homer and that's what happened."

The Cardinals handed their 40-year-old ace a 1-0 lead in the seventh inning on Nolan Gorman's line-drive double to left-center against Milwaukee starter Corbin Burnes. Paul Goldschmidt, who led off the inning with a single, scored from first as the ball eluded center fielder Tyrone Taylor.

But Wainwright allowed Luis Urias, one-out, first-pitch homer to center in the eighth, and Devin Williams (4-2) retired the side in order in the ninth.

"That was an enormous play (by Urias) to get us back to even," Brewers manager Craig Counsell said. "It was just a tough night. Wainwright's off-speed stuff was really on point. It felt tough to score. Just one swing of the bat tied it up and gave us fresh life."

In the 10th, Renfroe led off with a triple to right against Giovanny Gallegos (2-5), scoring automatic runner Andrew McCutchen.

"My mindset was to see the ball up," Renfroe said. "I was looking for something out over the plate. Got a fastball out over. It was a little high, honestly."

Matt Bush allowed Dylan Carlson's sacrifice fly in the 10th but struck out the next two batters for his third save. It was his second save with the Brewers, who dealt closer Josh Hader to the Padres and acquired Bush from Texas at the trade deadline.

"It's a position I've been put in and we've had close games," Bush said. "The manager has confidence to put me in there. I haven't been used to pitching in these tough, tight games. It's huge for me to get my feet wet in a place like St. Louis. It's a bit nerve-wracking."

Burnes, last year's NL Cy Young Award winner, allowed four hits with six strikeouts in seven innings. He worked seven scoreless innings in each of his previous starts against the Cardinals this season.

"As far as being efficient, it was pretty good," Burnes said. "It just happens three of best games this year have been against these guys. It's a good time to have good games against them."

McCutchen broke up Wainwright's no-hit bid with a two-out single in the seventh. He has 25 hits against Wainwright, the most of any current player.

The Brewers finished with four hits.

Wainwright worked nine innings for the second time this season without winning either game. He went the distance in a 2-0 loss to Philadelphia on July 8.

"That was a really nice job to go nine," Cardinals manager Oliver Marmol said. "He got every leadoff man out every inning. That's as efficient as you can be."

Wainwright's previous start was his worst of the season. He yielded six runs while throwing 111 pitches over four-plus innings against the New York Yankees last Sunday.

The Cardinals hosted a 40-year anniversary reunion of their 1982 World Series Championship team. Milwaukee, then in the AL, was their opponent in that Fall Classic. Hall of Famers Whitey Herzog, Ozzie Smith and Jim Kaat, took part in the pregame ceremony along with Willie McGee, Keith Hernandez and Tom Herr, who threw out the first pitch to Smith. More than 20 former players and staffers participated.

A PAIR BEYOND COMPARE

Wainwright and Yadier Molina made their 319th start as batterymates, the second-most in the majors since 1901 and five shy of tying the Detroit Tigers duo of Mickey Lolich and Bill Freehan (324 starts from 1963-75).

It was the 363rd time Molina has caught Wainwright including relief appearances, which passes Lolich and Freeman for the fifth-most appearances by a pitcher-catcher combo since 1961.

Brewers: RHP Trevor Gott (right forearm strain) was placed on the 15-IL retroactive to Aug. 11. ... RHP Trevor Rosenthal (left hamstring) begins a rehab assignment Tuesday at Triple-A Nashville. Rosenthal hit 98 mph during a workout Friday. ... RHP Peter Strzelecki was recalled from Nashville. ... RHP Justin Tota (elbow) was reinstated from the 60-day IL and optioned to Nashville. Topa last pitched in the majors on Sept. 3, 2021. He has been on the injured list all year.

Cardinals: Corey Dickerson was a late scratch with pain in his left calf. He entered the game in the ninth to play right field. ... LHP Steven Matz (torn left knee MCL) has been playing catch. He will be reevaluated on Monday. The club remains hopeful Matz can return for the playoffs. ... 1B/DH Juan Yepez (right forearm strain) may rejoin the club Tuesday. He is currently with Triple-A Memphis.

Cardinals: RHP Miles Mikolas (8-9, 3.50) has lost each of his last two meetings with the Brewers in St. Louis. Both times, the Cardinals were shut out.