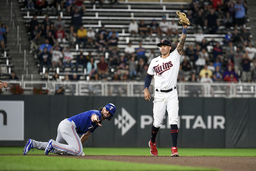 MINNEAPOLIS (AP) Luis Arraez and Jose Miranda hit back-to-back home runs in the first inning, and that was enough for Dylan Bundy as the Minnesota Twins beat the Texas Rangers 2-1 on Friday night.

Bundy (7-5) gave up a run on just two hits in 5 1/3 innings. Minnesota won its fourth game in a row and kept pace with Cleveland, which leads the Twins by one game in the American League Central.

"Just throwing it over the plate and letting them hit it right to people and they're doing a good job of that," Bundy said. "Lot of hard contact in the fourth inning, two balls hit to the wall there. But we played good defense all night I thought and played really good baseball."

Jorge Lopez walked a pair of batters but closed out his third save with the Twins when Charlie Culberson was doubled off second base. Brad Miller hit a hard liner that was caught by right fielder Max Kepler, who hurried his throw to second in time to beat Culberson.

"When the ball was hit originally, I guess he just assumed that it was down," Texas interim manager Tony Beasley said. "But it hung up just enough to be caught. He broke and once he broke, he got out there a little too far. Just didn't allow himself enough time to get back. He's trying to make a play, trying to score. It's unfortunate, hate to end a game that way. I'm sure nobody feels worse than Charlie right now about it."

The Rangers have lost three of four and 13 of 17 since the All-Star break.

Arraez, the AL batting leader, opened the scoring with his seventh homer of the year. He had six homers in 245 major league games coming into the season. Miranda, the rookie who was the team's minor league player of the year last season, followed with his 12th homer.

"I just tried to hit the ball because Martin, he's nasty," Arraez said. "His ball moves a lot. He's had a great year. I've enjoyed watching him, but I needed to do something to him. I just hit the ball and I got my homer."

Adolis Garcia led off the second with a single to extend his hitting streak to 16 games, the longest active streak in the majors and the longest for Texas since Elvis Andrus hit safely in 19 straight in 2018.

Garcia's single was the only hit against Bundy through the fifth. Rookie Bubba Thompson singled to start the sixth and stole second base. Thompson scored on Nathaniel Lowe's single off reliever Caleb Thielbar.

Thompson's run was the first allowed by the Twins after 31 2/3 straight scoreless innings, falling one out short of the club record set in 2004.

"It looked pretty damn good to me," Minnesota manager Rocco Baldelli said of the streak. "I like what I've seen up and down, starters and bullpen. So, let's keep the momentum going. I think we can build on that as a group and it ups the confidence of every other guy."

Bundy has allowed three runs in 13 1/3 innings over his last three starts, two of which came at home. In his first season with the Twins, Bundy is 4-1 with a 2.68 ERA at Target Field.

Rangers: RHP Joe Barlow was placed on the 15-day injured list with another recurrence of a blister on his right index finger. Barlow, who has been Texas' closer for much of the season, has 13 saves and a 3.16 ERA this season. RHP A.J. Alexy was recalled from Triple-A Round Rock.

Twins: RHP Tyler Mahle (shoulder fatigue) will not throw for a few days and he's unlikely to start in his next turn in the rotation. The team hasn't decided if he will have a stint on the injured list. . 2B Jorge Polanco was back in the lineup after missing three games with knee soreness.

RHP Chris Archer (2-6, 4.15 ERA) will start for Minnesota on Saturday evening in the second game of the four-game series. Texas will counter with RHP Glenn Otto (5-8, 4.96). Archer gave up three runs in four innings in his last start. Otto has allowed two runs or less in his last three starts.