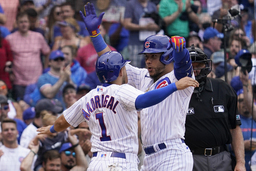 CHICAGO (AP) Willson Contreras hit an RBI single to cap a two-run rally in the 11th inning and the Chicago Cubs kept coming back, beating the Milwaukee Brewers 6-5 on Saturday for their fifth straight win.

Contreras had a two-run homer in the fifth. He hit his third home run in three games and 20th this year - the three-time All-Star is the first Cubs catcher to go deep 20 times in four seasons.

Contreras sure impressed Cubs starter Marcus Stroman, who left with a one-run lead in the eighth.

"To sit there and catch an extremely long, tedious game to be locked in and still be locked in in your last AB of the game, that's pretty special," said Stroman, who allowed just two hits. "Willie's the horse that we have and you know, I mean he's the backbone of this group."

The Cubs scored once in the ninth to tie, once more in the 10th to keep it even and finally won in the 11th.

Patrick Wisdom doubled home automatic runner Nico Hoerner to make it 5-all. Wisdom was later thrown out at the plate trying to score on Nick Madrigal's grounder, but Contreras singled off Peter Strzelecki (1-1) to end it.

"They're all pulling from the same end of the rope, to be cliche," Cubs manager David Ross said. "They just want to be playing and supporting each other.

"We're getting good starting pitching, timely hitting, guys having good at-bat, the dugout is lively. Confidence is a strong thing in this game, and these guys got a lot of it right now."

Andrew McCutchen scored from third in the top of the 11th on Kolten Wong's ground ball to first put Milwaukee ahead 5-4.

In the 10th, Cubs automatic runner Ian Happ scored from third on Franmil Reyes' short sacrifice fly. Left fielder Christian Yelich charged in and caught the ball, but dropped it as he was preparing to throw to the plate. Reyes ran to second on the play, but the catch was confirmed by video review.

"I don't really know what happened," Yelich said. "I went to pull it out of the glove and obviously I didn't get a great grip on it."

Pinch-hitter Mike Brosseau singled in automatic runner Luis Urias in the top of the inning to put the Brewers ahead 4-3.

Madrigal's third single of the game, with two outs in the ninth and just over the glove of Wong at second base, drove in Wisdom from second to tie it. Madrigal had three hits for the second straight game.

Devin Williams blew the save in the Cubs ninth, issuing three walks and allowing Madrigal's blooper. Taylor Rogers struck out Ian Happ with the bases loaded to send the game to extra innings.

Willy Adames had a two-run homer off Rowan Wick in the eighth to put the Brewers ahead 3-2. Milwaukee finished with just four hits.

The Brewers lost their second straight and fifth in seven.

"We've kind of put our backs up against the wall a little bit and you have to respond," Brewers manager Craig Counsell said. "Every team has losses like this that feels like it stings a little bit more."

The start of the game was delayed 41 minutes by rain. Showers returned in the top of the eighth, but play continued.

Contreras is the 17th Cubs player to hit 20 or more homers in at least four seasons.

Wisdom fouled off five pitches before walking on Williams' 10th to him in the ninth to help tie it.

Brewers: Reinstated C Omar Narvaez (left quadricep strain) from the IL and placed him in the starting lineup. Narvaez was out since Aug. 3. "Omar's kind of an important player for us," Counsell said. "Good to get him back." Narvaez batted eighth and went 0 for 3. To make roster room, Milwaukee optioned C Mario Feliciano to Triple-A Nashville.

Cubs: Placed RHP Keegan Thompson on the 15-day IL with low back tightness and recalled RHP Anderson Espinoza from Triple-A Iowa. Thompson is 9-5 with a 3.97 ERA and leads Chicago in wins. Manager David Ross doesn't believe Thompson's injury is serious, but said it affected the 27-year-old righty on Friday against Milwaukee when he allowed five runs in 3 2/3 innings in a second straight shaky start. . Espinoza was recalled from the minors for the sixth time this season and is 0-2 with a 4.11 ERA in six games with the Cubs in 2022. ... Wisdom may have hurt the ring finger on this left hand when he tried to scored in the 11th, Ross said.